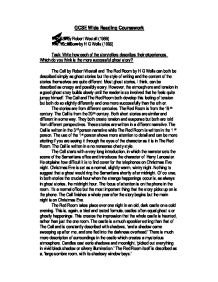 The Call by Robert Westall (1989) The Red Room by H G Wells (1896) Write how each of the storytellers describes their experiences. Which do you think is the more successful ghost story?

GCSE Wide Reading Coursework The Call by Robert Westall (1989) The Red Room by H G Wells (1896) Task: Write how each of the storytellers describes their experiences. Which do you think is the more successful ghost story? The Call by Robert Westall and The Red Room by H G Wells can both be described simply as ghost stories but the style of writing and the content of the stories themselves are quite different. Most ghost stories, I think, can be described as creepy and possibly scary. However, the atmosphere and tension in a good ghost story builds slowly until the reader is so involved that he feels quite jumpy himself. The Call and The Red Room both develop this feeling of tension but both do so slightly differently and one more successfully than the other. The stories are from different centuries. The Red Room is from the 19th century. The Call is from the 20th century. Both short stories are similar and different in some way. They both create tension and suspense but both are told from different perspectives. These stories are written in a different narrative. The Call is written in the 3rd person narrative while The Red Room is written in the 1st person. ...read more.

They are not given names but each time they are mentioned, they are described differently, emphasising their extreme age and disability. 'The man with the withered arm, the old woman and a second old man, more bent, more wrinkled, more aged even than the first.' 'They were all close together, dark against the firelight, staring at me over their shoulders, with an intent expression on their ancient faces.' 'They seemed to belong to another age, an older age, an age when things spiritual were different from this of ours.' 'Their very existence was spectral.' 'Three old and distorted people'. The characters in The Call, Meg and Geoff, are quite different. Although the characters are not very developed they seem like a fairly normal, young, married couple, 'Meg and Geoff Charlesworth. Just married. No kids.' We do not see Meg's true personality for very long in the story as the ghost calls her and puts her into some sort of trance. 'She didn't respond. She seemed frozen, just listening.' Geoff is calm throughout, even when his wife, Meg, is put in a trance by the ghost. He believes the duty manager, Tom Brett, who is quickly described as 'brisk and cheerful', that there couldn't possibly be a ghost. ...read more.

Another reference to "the call", not just from the ghost, but also from the river. The river calls again even later in the story, 'in an evil way, it called to Geoff'. In The Call everything is fully explained, in so much as a ghost story can be explained and finally resolved. The ending ties up all the loose ends; Meg and Geoff recover and carry on as Samaritans. Harry Lancaster dies but seems to have sorted out the problem of the ghost somehow for she does not phone the following Christmas Eve. I liked the fact that the mystery was solved in The Call and I also liked it because of its use of modern language which made it easier to enjoy and understand. I thought The Red Room was quite gripping and exciting, especially during the last scene in the room. The fact that the mystery of the castle was not fully explained at the end of the tale adds to its interest. It is not a 'tangible ghost' at the end of this story but an extreme emotion of fear. Both stories generated excitement in their own ways. Receiving a phone call from a ghost was quite a good idea. Ending a ghost story, as in The Red Room, so dramatically and without a ghost was a very clever idea. ...read more.