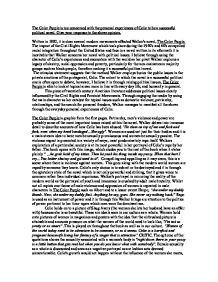 The Color Purple is too concerned with the personal experiences of Celie to be a successful political novel. Give your response to the above opinion. Written in 1982, it is clear several modern movements affected Walker's novel, The Color Purple. The impact of the Civil Rights Movement which took place during the 1950's and 60's compelled racial integration throughout the United States and thus in a novel written in its aftermath it is inevitable that Walker concerns her novel with political issues. I believe through using the character of Celie's experiences and encounters with the world as her pivot Walker explores a legacy of slavery, racial oppression and poverty, particularly for the non-mainstream majority groups such as black people, therefore making it a successful political novel. The stimulus statement suggests that the method Walker employs buries the public issues in the private emotions of the protagonist, Celie. The extent to which the novel is a successful political one is often open to debate, however, I believe it is through raising political issues, The Color Purple is able to look at topical areas more in line with every day life, and humanity in general. This piece of twentieth century American literature addresses political issues clearly influenced by the Civil Rights and Feminist Movements. Through engaging the reader by using the main character as her catalyst for topical issues such as domestic violence, patriarchy, relationships, and the search for personal freedom, Walker manages to manifest all the above through the everyday personal experiences of Celie. The Color Purple is graphic from the first pages. Patriarchy, men's violence and power are probably some of the most important issues raised within the novel. Walker delves into immense detail to describe accounts of how Celie has been abused "He clam on top of me and fuck and fuck, even when my head bandaged...She ugly". Women are used not just for their bodies and it is a main stream idea to have men be sexually promiscuous and women be sexually passive. ...read more.

In her anger Celie admits that she is disillusioned with the idea of religion. She tells Shug "the God I been praying and writing to is a man...Trifling, forgetful and lowdown...If he ever listened to poor colored women the world would be a different place", Shug objects Shug believes "God is inside you and inside everybody else...".Shug presents Celie with the freedom to question her conventional view of God, created and imposed upon her by white men, and to use her own experiences to invent a form of spirituality. A new spiritual belief is that "it pisses God of if you walk by the colour purple in a field somewhere and don't notice it". Celie associates the colour purple with herself, and for once it is not because of bruises. She accepts she is something God created which deserves to be loved and admired. This strong correlation formed by these feminine characters can be interpreted as a revolt against the typical male patriarchal society. Religion is used to suggest that patriarchal society should be overthrown in order to create a better, purer world. Religion allows Walker to bring in more complicated themes and expand our knowledge and understanding. Walker widens are understanding through globalising themes "army got to wear clothes if they fighting in Europe, France, Germany or the Pacific" Walker draws a parallel between women in the early twentieth century and slavery through the life of Celie, performing many of the jobs assigned to women during the period as well as labour in the field; "I move around darning and ironing, finding hanskers...while I'm in the field, I be's chopping cotton three hours by time he come". Her role in society directly correlates with the gender roles of the women of America and the Olinka tribe allowing a conclusion to be made that many women were most always subordinate to men until the Women's Rights Movement. ...read more.

Some of Walker's critics claim that Walker uses much "wit" and has "an amazing way with words". Walker grew up in the state of Georgia but in the years that The Color Purple is set things were a lot different to how they are now. Despite the civil war between the North and South divide of America, slavery was still an every day occurrence in parts of America particularly Georgia, which was still very pro-slavery. She applies a feminist approach to literature although she does not like to be called a feminist writer as she prefers to be called a womanist, which she defines as being a black feminist. Walker is a feminist as the whole of the novel portrays her influence on giving women equal rights to the rights of men. Walker, like Celie has used her own personal experiences effectively in conveying the politics relevant and most applicable to her. Celie has many misfortunes and negative ordeals including rape and several beatings but at the end of the novel she survives, grows in confidence, maturity and becomes independent due to the support given from other female characters. Celie is freed from degradation by men and patriarchal society that was present at the time of the novel. The beginning and the ending, through Celie's experiences indicates that the novel is a tragic comedy. The tragedy in the reality of these scenarios having actually once occurred and the comedy through Celie's dialect and innocence; "men look like frogs to me- no matter how you kiss 'em, as far as I'm concern, frogs is what they stay". It is easy to criticize the ease with which Walker concludes the novel, ensuring that Celie's life has a somewhat unlikely "happy ending". Yet if the reader approaches the novel as an allegory for female empowerment then the ending is far more satisfactory. By using Celie as a focus point, Walker successfully embeds political elements into her story and opens the reader's eyes to the real world. ...read more.