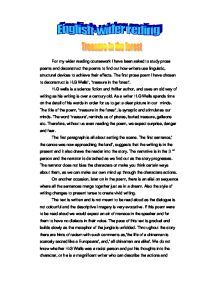 The first prose poem I have chosen to deconstruct is H.G Wells', 'treasure in the forest'.

For my wider reading coursework I have been asked to study prose poems and deconstruct the poems to find out how writers use linguistic, structural devices to achieve their effects. The first prose poem I have chosen to deconstruct is H.G Wells', 'treasure in the forest'. H.G wells is a science fiction and thriller author, and uses an old way of writing as his writing is over a century old. As a writer H.G Wells spends time on the detail of his words in order for us to get a clear picture in our minds. The title of the poem, 'treasure in the forest', is synaptic and stimulates our minds. The word 'treasure', reminds us of pirates, buried treasure, galleons etc. Therefore, without us even reading the poem, we expect surprise, danger and fear. ...read more.

The text is written and is not meant to be read aloud as the dialogue is not colourful and the descriptive imagery is very evocative. If this poem were to be read aloud we would expect an air of menace in the speaker and for them to have no dialects in their voice. The pace of this text is gradual and builds slowly as the metaphor of the jungle is unfolded. Throughout the story there are hints of racism with such comments as,'the life of a chinaman is scarcely sacred like a Europeans', and,' all chinamen are alike'. We do not know whether H.G Wells was a racist person and put his thoughts into the character, or he is a magnificent writer who can describe the actions and words of a racist person to detail or, he could also unintentionally put it there to give a sense of reality to the poem. ...read more.

This poem is set in the Philippine jungle where everything is unknown to the men. Most of the images Wells describes are negative as there is an air of the supernatural about and an 'alien landscape'. The two men suspect there is something eerie about the forest as they 'turned and looked into the dim cool shadows of the silent forest behind them', why would they turn around if there were nothing there? The hook at the end, is when both men die as a result of being poisoned. We do not expect a happy ending in this poem, as there was a murder in the past also, all of the text is written as if everything is hostile and distorted therefore we, at the back of our minds, expect a twist at the end or a cliff-hanger. ...read more.