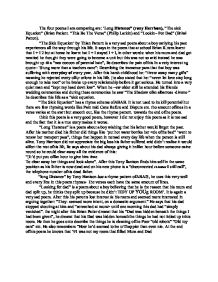 The four poems I am comparing are: 'Long Distance" (rony Harrison), "The sick Equation" (Brian Patient. "This Be The Verse" (Philip I.arkin) and "I.ookin~ For Dad" (Briwi Patton). "The Sick Equation' by Thian Pattern is a very sad poem about a boy cariying his past experiences all the way through his life. It says in the poem that at school Brian R.ttem learnt that I + I 2 but at home he learnt hat I + I stayed I + I, in other words: when his mum and dad got mmtied he thought they were going to become a unit but this was not so arid instead he was brought up iii a "raw cocoon of parental hate", lie describes the pain ofthis In a veiy interest ng quote~ 'Stung more than a teachers cane": Describing the immense pam that that boy was suffering with everyday of every year. ...read more.

rho amount oflines in a verse varies at the start but smooth out, like the rhyme pattern. towards the end ofthe poem. think this poem is a very good poem, however I dkt rot enjoy this poem as it is too sad and the fact that it is a true story makes it worse. "Long Thstanee" is a poem about a boy wishing that his lather would lbrgct the past. Afler his mother died his fitther did things like 'put hot water bottles her <de ofthe bed" 'went to renew her transport pass", things that happen in nomad every day life when the person is still alive. Tony Harrison did not appreciate the big loss his father suffered arid didn't realise it would aIfect the rest ofhis lilt, lie says about his dad always ...read more.

It is again a very sad poem. Alter this his parents lost interest in his room and seemed more interested in arguing together: "They- seemed more intent, on a domestic argument." He says that his dad stopped shouting at him and "screeched at mum> until one morning this dad had "simply vanished". the night alter this Brian Patter dreamt that his "Dad was hidden beneath the things I had been given", he dreamt that his Dad was hidden honeaththe things he had not tidied up inhis room. He then he goes onto describe the things he is cleaning ofthe Poor "old robots" "Old toy cars" etc. He also remembers "How he'd seemed to be urThappier than even nie. At the end ofthis poem he knows that '91 was not my room that filled Mum and Dad ...read more.