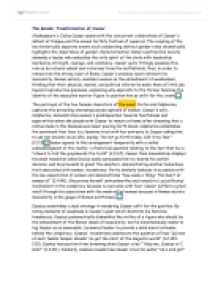 The Gender Transformation of Caesar

The Gender Transformation of Caesar Shakespeare's Julius Caesar opens with the concurrent celebrations of Caesar's defeat of Pompey and the annual fertility festival of Lupercal. The coupling of the two historically separate events each celebrating distinct gender roles dramatically highlights the importance of gender characterization. Rome's patriarchal society demands a leader who embodies the virile spirit of the state with leadership marked by strength, courage, and constancy. Caesar quite fittingly assumes this role as he returns valiant and victorious from the battlefields; thus, in order to remove him the strong ruler of Rome, Caesar's enemies must retrench his masculinity. Roman society considers women as the embodiment of weaknesses, thinking that their physical, mental, and political inferiority make them of little use beyond reproductive purposes, explaining why aspirants to the throne feminize the identity of the masculine warrior figure to position him as unfit for the crown. The portrayal of the two female characters of the novel, Portia and Calphurnia, captures the prevailing stereotypical perceptions of women. Caesar's wife, Calphurnia, demonstrates women's predisposition towards fearfulness and superstition when she pleads with Caesar to remain at home after dreaming that a statue made in the likeness was Cesar pouring forth blood. Calphurnia establishes the sentiment that fear is a feminine trait with her entreaty to Caesar asking him to use her anxiety as an alibi, saying, "Do not go forth today. ...read more.

Because the woman is the ruler of the domestic realm the use of the word "domestic" inadvertently places the Caesar in a feminine role. Caesar is symbolically the highest authority of a feminine entity, considering that Rome is classified as a feminine noun. Conjuring up further domestic imagery is Antony's comment that "mothers shall but smile when they behold/ Their infants quartered with the hands of war" (3.1. 267-68). Perhaps by placing Caesar in an unconventional mother-like role, Shakespeare allows for him to conceive the children that his infertile wife, Calphurnia, is never able to, thus, allowing for the full realization of Lupercal, the event that symbolically opens the play. In Calphurnia's foreboding dream of Caesar's statue, "Which, like a fountain with an hundred spouts, / Did run pure blood, and many lusty Romans/ Came smiling and did bathe their hands in it" (2.2.76-79), Caesar becomes a nursing mother as his, suggesting that Caesar provides mother-like lifeblood to his country in his death, reaffirming Decius' earlier interpretation of Calphurnia's dream that "from you [Caesar] Rome shall suck/ Reviving blood" (2.2.87). A variation of the notion of Caesar as a reproductive figure is the notable parallel between the bloody images used to discuss Caesar's body and the menstrual of women. ...read more.

Similarly, it is through his wounds that Caesar is able to eventually to win vindication for his death because they move the crowd to action against the conspirators, allowing for leadership through injury. The sword symbolically represents a phallic-like sign of vitality which leads to the retransformation of Caesar into a figure of masculinity. Brutus acknowledges, "O Julius Caesar, though art mightly yet/ Thy spirit walks abroad and turns our swords/ In our own proper entrails (5.3.94-96). The sword that causes Caesar's fatal wounds serves as the instrument that brings an end to Cassius and Brutus. Cassius proclaims in his death "Guide thou the sword- Caesar, thou art revenged, /Eve with the sword that killed thee" (5.3.45-46). This conclusion of ultimate victory of the masculine spirit seems the only fitting outcome for Shakespeare to engineer if his play is to be a true reflection of Roman culture. Women hold value only in terms of the services that the provide which advance the interests of the masculine community, and in this case, the conspirators needed grounds to render Caesar inadequate for his position and feminizing him provides a useful mechanism in doing so. The retransformation of Caesar solidifies itself in Octavious' declaration to the world that "This was a man!," (5.5.75) reinforcing the notion that the masculine spirit will prevail in Roman society. ...read more.

This is a top notch essay which easily attains - and goes beyond - top rating for GCSE work. It is detailed, knowledgeable, well researched and very perceptive, using sophisticated language. *****