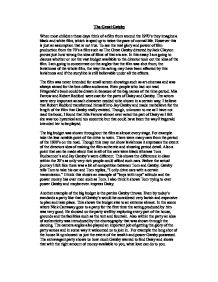 The Great Gatsby When most children these days think of a film from around the 1970's they imagine a black and white film, which is sped up to twice the pace of normal life. However this is just an assumption that is not true. To see the real glory and power of film production from the 70's a film such as The Great Gatsby directed by Jack Clayton proves just how wrong the idea of films of that era are. In this essay I am going to discuss whether or not the vast budget available to the director took out the idea of the film. I am going to concentrate on the angles that the film was shot from, the lavishness of the whole film, the way the acting may have been affected by this lavishness and if the storyline is still believable under all the effects. The film was never intended for small screen showings such as art-cinemas and was always aimed for the box-office audiences. Even people who had not read Fitzgerald's book could be drawn in because of the big names of the time period. ...read more.

This shows the budget size to an extreme almost. In the scene where Nick Carraway goes to a party for the first time the acting produced by him was very good. He showed us the party well by exploring every part of the house, grounds and the facilities such as the tent and fountain. Also within the party an idea of authenticity was introduced by the choreography that was shown through the dancing. The camera angles also played an important job of getting the glory of the party across and in some way it welcomed us to join in. For example the long shot of the house lit up showed us just the extent of the wealth and power Gatsby possessed. The extravagant party shows us how much Gatsby wanted to find Daisy and shows that with the right amount of money available to you, what love can do to you. Although all of the lavishness and attention to detail may bring the idea of authenticity to the film I feel that it detracts from the story and the acting. The film could have got away with less experienced actors and maybe been as popular. ...read more.

This idea of being part of the film was created by the narrator Nick Carraway. He was the neutral character who just leads us through the film and gives us his own view on everything that happened. The director aimed the film at people who had read the book but also at people who may not appreciate the works of Fitzgerald, by producing a visual film. I believe the film is a very good interpretation of the life of the 20's with symbols of the period such as the Model T Ford cars used throughout but also the symbol of the wealth that some people possessed during the 20's such as different cars and lovely houses. This all added to the authenticity of the film. I believe the flow of the film was slowed down by the intimacy between Gatsby and Daisy and also maybe the idea of making it fit with the 20's so closely. The film was well produced at a high standard but due to the fact I have not read the book, only been told that it looses the storyline a bit, I cannot say whether or not the film could be improved by sticking to the story or not. By Nathan Flye ...read more.