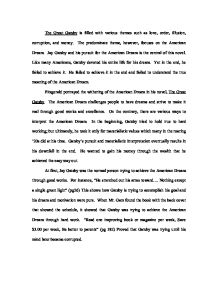 The Great Gatsby is filled with various themes such as love, order, illusion, corruption, and money.

At first, Jay Gatsby was the normal person trying to achieve the American Dream through good works. For instance, "He stretched out his arms toward.... Nothing except a single green light" (pg26) This shows how Gatsby is trying to accomplish his goal and his dream and motivation were pure. When Mr. Gatz found the book with the back cover that showed the schedule, it showed that Gatsby was trying to achieve the American Dream through hard work. "Read one improving book or magazine per week, Save $3.00 per week, Be better to parents" (pg 182) Proved that Gatsby was trying until his mind later became corrupted. ...read more.

This green represents hope and money like Daisy's voice is "full of money." Buying emotions from people is not the true meaning of the American Dream. Bootlegging and methods to gain money through illegal materials with Meyer Wolfsheim was how the book hinted that Gatsby amassed the money that he had. During this period, there was Prohibition, and people hung out illegally in "speakeasies." People made plenty of money by providing alcohol, something Gatsby could have done during the period. Gatsby went against the law in order to achieve his American Dream to gain Daisy's love. Jay Gatsby followed the American Dream in the beginning; however, in the end, he was corrupted which led him to his destruction. The dream is polluted and destroyed by his strive for material success and to "buy" Daisy back. ...read more.