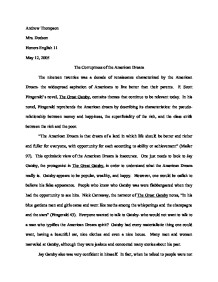 Andrew Thompson Mrs. Dodson Honors English 11 May 12, 2005 The Corruptness of the American Dream The nineteen twenties was a decade of renaissance characterized by the American Dream- the widespread aspiration of Americans to live better than their parents. F. Scott Fitzgerald's novel, The Great Gatsby, contains themes that continue to be relevant today. In his novel, Fitzgerald reprehends the American dream by describing its characteristics: the pseudo-relationship between money and happiness, the superficiality of the rich, and the class strife between the rich and the poor. "The American Dream is that dream of a land in which life should be better and richer and fuller for everyone, with opportunity for each according to ability or achievement" (Mailer 97). This optimistic view of the American Dream is inaccurate. One just needs to look to Jay Gatsby, the protagonist in The Great Gatsby, in order to understand what the American Dream really is. Gatsby appears to be popular, wealthy, and happy. However, one would be oafish to believe his false appearance. ...read more.

Gatsby stated, "I don't think she ever loved him [her husband] (Fitzgerald 159). Gatsby's imagination and arrogance led to his decline. Gatsby's dream was not successful. Since he did not "have" Daisy, his life was purposeless and empty. In fact, he had nothing to live for. His wealth had not brought him happiness. Instead, however, it brought him great displeasure: he had no friends and no family members to talk to. Fitzgerald used Gatsby to illustrate that wealth cannot make one happy. In fact, being excessively wealthy can actually make people miserable. Gatsby did not know what to do with his life. He decided to lie about his life to make him seem more successful and go after a girl who was married. Moreover, the superficiality of the rich is very apparent in the idea of the American Dream. Daisy and Tom Buchanan appear to be in a perfect relationship. They are both attractive and appear to be in love. ...read more.

With it, she would have a utopian life. In her first golf tournament, she decides that winning is more important than having morals; henceforth, she decides to cheat to ensure a good result. She thought nothing of it. She did not care about other people who deserved to win, and more importantly, she did not care about being an honest person. Yes, it is nice to win once in awhile, but some day superficial people will have to look in a mirror and realize that they live a life without virtue. The biggest flaw in the American dream involves the class struggles between the rich and the poor. David Shipler, author of The Working Poor: Invisible in America states, "The American Dream still remains elusive for many, such as minorities, women, and those mired in poverty" (Shipler 32). The American Dream does not appear to be attainable for all. It is only accessible for those who grew up in great wealth. Another author, Wyly also comments, "Forty-five percent of Americans believe that government is more of a hindrance than a help in achieving the dream" (Wyly 34). ...read more.

This question asks candidate to consider how F. Scott Fitzgerald presents the frailty and corruptness of The American Dream. The novel 'The Great Gatsby' lends itself well to this question, and the candidate retains a fairly established focus on the ...

This question asks candidate to consider how F. Scott Fitzgerald presents the frailty and corruptness of The American Dream. The novel 'The Great Gatsby' lends itself well to this question, and the candidate retains a fairly established focus on the question by concerning some of the flaws of The American Dream in the context of Fitzgerald's characters. It is also not hugely clear that the candidate has the proper understanding of the novel. Throughout the essay, Gatsby is referred to as "arrogant" and "condescending". Whilst most essay answers allow some room for personal interpretation, it is safe to say that this is clearly not the intention that Fitzgerald had for this character. Instead, Jay Gatsby was cast as a man with an impeccable dedication to hope - a belief in the possibility the he could repeat the past and re-ignite his relationship with Daisy. The fact he is so pleasant and comes across with a (quite often forced) gentlemanly demeanour are tools he sues to gain social status and adulation, so he is far from being describe as the candidate has here. And the problem with this is that a lot of the analysis of The American Dream is hung off the misconception of Gatsby's character - this shows a hole in the candidate's understanding of Fitzgerald's characterisation, and thus the candidate cannot score highly grade-wise as their risk in not comprehending the character properly hasn't paid off. This is why it is of absolute importance that candidates acquire the correct understanding of the characters, allowing room for their own interpretation, so long as it does not contradict the author's intentions.

The Level of Analysis is fair, though what is good about this essay is, as aforementioned, stunted somewhat by a lack of comprehension about the protagonist. A fundamental understanding and appreciation of what the author was trying to achieve with his characters (it is they, after all, who "act" out the corrupted American Dream) is imperative. Where the candidate should be commenting extensively on how The American Dream and it's corrupt futility is felt by the characters, they have instead acted as a sort of narrator, dropping in bits of analysis of character and themes, rather than solely focusing on the question steer. Without directly addressing how the characters' actions represent the corruptness of The American Dream this essay is restricted. There is evidence that the candidate has tried, such as when they comment on the social strife between rich and poor, but the seal up this answer into a nicely-fitting, tightly structured answer the candidate must refer to this point (which is made in the introductory paragraph).

The Quality of Written Communication is fine. Where there are small errors in writing/typing, they do not compromise the comprehension of what the candidate is trying to say. There is a sound use of grammar and spelling, although a greater variety of punctuation could be used (colons, semi-colons) to show to the examiner that candidates write with confidence. A minor irk with this answer it the use of underlining when writing the title of the novel - the standard presentation of the title of any published work is to enclose the title in inverted commas like so - 'The Great Gatsby'. It is important candidates realise this as it shows adherence to the standard method of English writing.