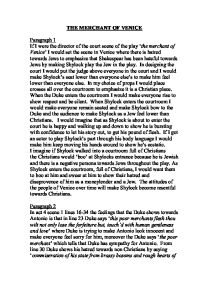 THE MERCHANT OF VENICE Paragraph 1 If I were the director of the court scene of the play 'the merchant of Venice' I would set the scene in Venice where there is hatred towards Jews to emphasize that Shakespear has been hateful towards Jews by making Shylock play the Jew in the play. In designing the court I would put the judge above everyone in the court and I would make Shylock's seat lower than everyone else's to make him feel lower than everyone else. In my choice of props I would place crosses all over the courtroom to emphasize it is a Christian place. When the Duke enters the courtroom I would make everyone rise to show respect and be silent. When Shylock enters the courtroom I would make everyone remain seated and make Shylock bow to the Duke and the audience to make Shylock as a Jew feel lower than Christians. I would imagine that as Shylock is about to enter the court he is happy and walking up and down to show he is bursting with confidence to let his story out, to get his pound of flesh. If I got an actor to play Shylock's part through his body language I would make him keep moving his hands around to show he's ecstatic. I imagine if Shylock walked into a courtroom full of Christians the Christians would 'boo' at Shylocks entrance because he is Jewish and there is a negative persona towards Jews throughout the play. As Shylock enters the courtroom, full of Christians, I would want them to boo at him and swear at him to show their hatred and disaprovence of him as a moneylender and a Jew. ...read more.

In extent Portia states 'though justice be thy plea, consider this, that in the course of justice none of us should see salvation: we do pray for mercy, and that same prayer doth teach us to render the deeds of mercy' where Portia is saying even though you want your pound of flesh have mercy. If I were the director I would make an actor deliver these lines in a compassionate and quiet tone of voice. The body language I would direct the actor to use is the actor constantly moving their hands. Paragraph 6 Act 4 scene 1 illustrates the opposition between appearance and reality when Portia disguises herself as a male; the other characters in the play that are not what they seem are Nerrisa and Jessica (Shylocks daughter). Nerrisa dresses up as a male to deceive the court; and Jessica disguises herself as a male (boy) to escape from her father's home. The characters who have deceived others is Portia when she wanted back her ring which she gave to Bessanio, she dresses up as someone else and persuades Bessanio to give her the ring. Bessanio had a conversation with Portia but does not recognise her, I would direct the person playing Portia to keep on moving so it is not possible for Bessanio to get a clear view of Portia's face; I would also make Portia wear the complete opposite of clothes she would usually wear. Moreover I would make Portia use a soft tone of voice so Bessanio could not make a comparison between Portia and the person deceiving Bessanio voices. ...read more.

As Shylock leaves the stage for the last time I would direct him to leave with his head down also with an upset face. Paragraph 10 Both Portia and Nerissa talk of adopting manly behaviour in Act 3 Scene 4 to go with their disguises for the trial. When Portia appears as a man in the trial scene she uses language differently by using jargon (specialized or technical vocabulary of a profession) such as statements like 'I have spoke thus much to mitigate the justice of thy plea' also 'there is no power in Venice can alter a decree established' moreover 'it is enacted in the laws of Venice.' Portia also has an authoritive and masculine voice, she also acts like a man in the way she uses body language. Paragraph 11 Shylock receives judgement but not justice, we know that he doesn't receive justice because he lent three thousand duceets to Antonio and in return he does not receive his pound of flesh or gets his money back but losses half his wealth and on top of that he must give up his religion and turn into a Christian. Also in his will he must give all his possessions to his son Lorenzo and his daughter, when Shylock is dead. The qualities of mercy which are displayed in the court scene is by Antonio when he says 'to quit the fine for one half of his goods' where Antonio is allowed to take half of Shylocks possessions but he gives it back to Shylock under some conditions 'he presently become a Christian, of all he dies possessed, unto his son Lorenzo and his daughter' which shows that Antonio did not want to take Shylock's lively hood. By Hisham Mamode 10PRL ...read more.