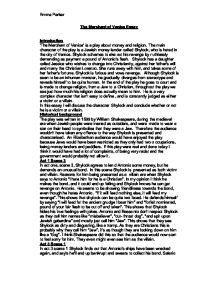 The Merchant of Venice Essay Introduction 'The Merchant of Venice' is a play about money and religion. The main character of the play is a Jewish money lender called Shylock, who is hated in the city of Venice. Shylock schemes to eke out his revenge by ruthlessly demanding as payment a pound of Antonio's flesh. Shylock has a daughter called Jessica who wishes to change into Christianity, against her father's will and marry the Christian Lorenzo. She runs away with him, and takes some of her father's fortune. Shylock is furious and vows revenge. Although Shylock is seen to be an inhuman monster, he gradually diverges from stereotype and reveals himself to be quite human. In the end of the play he goes to court and is made to change religion, from a Jew to a Christian, throughout the play we see just how much his religion does actually mean to him. He is a very complex character that isn't easy to define, and is constantly judged as either a victim or a villain. In this essay I will discuss the character Shylock and conclude whether or not he is a victim or a villain. Historical background The play was written in 1599 by William Shakespeare, during the medieval era when Jewish people were treated as outsiders, and were made to wear a star on their head to symbolise that they were a Jew. ...read more.

I think the audience would have started to dislike Shylock and see him as a villain. Shylock's speech on "Hath not a Jew eyes" is basically about Shylock comparing Jews with Christians. He says "If you prick us, do we not bleed? If you tickle us, do we not laugh?" He also says "Revenge if a Christian wrong a Jew, what should his sufferance be by Christian example." I think that Shylock is trying to say is that if a Christian does wrong by a Jew, what should his revenge back, be? As if he's questioning his revenge on Antonio. I think he concludes by saying people show him how to be bad but he wants to show them how to be really bad, (revenge). This would make the audience realise that Shylock isn't all that evil and has a good point. They might even start to feel sorry for him, or some might just be confused by now. In this scene Shakespeare gives the Jewish Shylock a voice and a chance to defend himself and criticise the Christians behaviour towards Jews by when Shylock talks about Jews having the same rights as a Christian. Shylock defends himself by concluding that he will "execute" and "revenge". In this scene I think Shylock is portrayed as a villain because he wishes his daughter dead. On the other hand he would have also made the audience realise that Shylock had a nicer side to him, than what people expected, and he could defend himself well. ...read more.

As Shylock would feel like he's won already and Bassanio and Antonio would be getting quite worried. Conclusion In my opinion I think that Shylock is a villain. My reasons for my decision are because in Act 3 Scene 1 Shylock says things which are really selfish and disgusted me. Like when he says "I would my daughter be dead at my foot. I shall never see my gold again". This to me says everything about him, he wishes his daughter dead, and seems to only care about his Jewellery and money. I think Shylock is a very selfish and cold hearted man. Although he seems to be an evil and horrible man, at times I did actually feel quite sorry for him. Like in Act 1 scene 3 when he gets called a "cut- throat dog". The way he defended himself was quite interesting, it reminded me of the speech that Martin Luther King did. About black people being the same as white people. Shylock was trying to say that he (a Jew) was the same as all the Christians who lived in Venice. I think this is the kind of image that Shakespeare was trying to create, how there was tension with Christians and Jews in this era. I think he may have had mixed feelings on Jews and that's why he made Shylock such a complicated character to understand. I think the aim of the play was to actually decide if Shylock was a victim or a villain. Emma Parker ...read more.