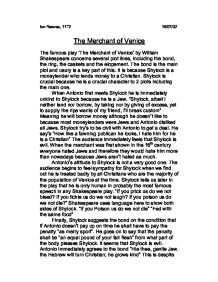 Ian Reeves, 11T2 18/07/02 The Merchant of Venice The famous play 'The Merchant of Venice' by William Shakespeare concerns several plot lines, including the bond, the ring, the caskets and the elopement. The bond is the main plot and usury is a key part of this. It is because Shylock is a moneylender who lends money to a Christian. Shylock is crucial because he is a crucial character to 2 plots including the main one. When Antonio first meets Shylock he is immediately unkind to Shylock because he is a Jew. "Shylock, albeit I neither lend nor borrow, by taking nor by giving of excess, yet to supply the ripe wants of my friend, I'll break custom" Meaning he will borrow money although he doesn't like to because most moneylenders were Jews and Antonio disliked all Jews. ...read more.

If you tickle us do we not laugh? If you poison us do we not die?" Shakespeare uses language here to show both sides of Shylock. "If you Poison us do we not die" "Fed with the same food" Finally, Shylock suggests the bond on the condition that if Antonio doesn't pay up on time he shall have to pay the penalty "as merry sport". He goes on to say that the penalty shall be "an equal pound of your fair flesh" from what part of the body pleases Shylock. It seems that Shylock is evil. Antonio immediately agrees to the bond "Hie thee, gentle Jew. the Hebrew will turn Christian; he grows kind" This is despite that he cannot confirm repayment. He does this because he is sure that he will be able to Soon after Shylock's daughter, Jessica, leaves in Act3 Scene1, Salarino meets Shylock on a street. ...read more.

The duke begs him to take the money and not the pound of flesh but Shylock won't have it. Meanwhile, Gratsiano is still taunting Shylock. Shylock is defeated by Portia, dressed up as a lawyer, but there is worse to come "the law hath another hold on you" He is punished when he cannot spill any blood when cutting the pound of flesh from near Antonio's heart. The other 'hold' on Shylock is a punishment for wasting the court's time. He ends up with nothing as half his possessions are given to the state and the other to the defendants. The audience's final view of Shylock is that he is revengeful, bully's target but is still seen as being fairly evil. At the end of the play some people will feel sorry for Shylock and some will think that he deserves what he got and this one will have been the only view when it was first screened in the 16th century. ...read more.