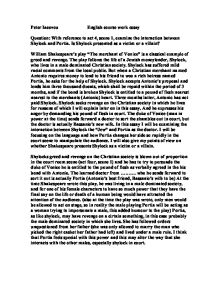 The merchant of Venice - With reference to act 4, scene 1, examine the interaction between Shylock and Portia. Is Shylock presented as a victim or a villain?

Peter Iacovou English course work essay Question: With reference to act 4, scene 1, examine the interaction between Shylock and Portia. Is Shylock presented as a victim or a villain? William Shakespeare's play "The merchant of Venice" is a classical example of greed and revenge. The play follows the life of a Jewish moneylender, Shylock, who lives in a male dominated Christian society. Shylock has suffered mild racial comments from the local public. But when a Christian merchant named Antonio requires money to lend to his friend to woo a rich heiress named Portia, he asks for the help of Shylock. Shylock accepts Antonio's proposal and lends him three thousand ducats, which shall be repaid within the period of 3 months, and if the bond is broken Shylock is entitled to a pound of flesh nearest nearest to the merchants (Antonio) heart. ...read more.

Shylocks greed and revenge on the Christian society is blown out of proportion in the court room scene (act four, scene 1) and he has to try to persuade the duke of Venice he is entitled to the pound of flesh as verbally agreed in the his bond with Antonio. The learned doctor from .......... who he sends forward to sort it out is actually Portia (Antonio's best friend, Bassanio's wife to be) At the time Shakespeare wrote this play, he was living in a male dominated society, and for one of his female characters to have so much power that they have the final say on the life or death of a human being would have attracted the attention of the audience. ...read more.

This may have shocked a Christian audience. Portia, for a while, allows Shylock to believe he is going to get his justice, with the use of language such as and his attitude towards Portia is positive because of this. Shylock calls Portia "a learned doctor". As the scene goes on, tension is building in the audience as Portia is making the increasingly worried that Shylock will claim his pound of flesh. The peak of the tension in the audience would be when Shylocks atrocious cruelty and revenge starts to turn into reality Portia requests the weighing scales and shylock has them ready prepared inside his jacket. He starts sharpening the knife he is expecting to use to take his pound flesh on his shoe, and anger must be boiling. Shylocks mood is increasingly improving as Portia tells Antonio that he should "lay bare your breast". ...read more.