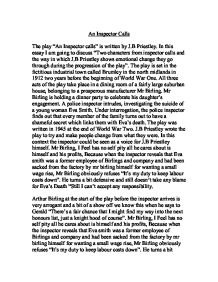 The play &quot;An Inspector calls&quot; is written by J.B Priestley. In this essay I am going to discuss &quot;Two characters from inspector calls and the way in which J.B Priestley shows emotional change they go through during the progression of the play&quot;. The play is

An Inspector Calls The play "An Inspector calls" is written by J.B Priestley. In this essay I am going to discuss "Two characters from inspector calls and the way in which J.B Priestley shows emotional change they go through during the progression of the play". The play is set in the fictitious industrial town called Brumley in the north midlands in 1912 two years before the beginning of World War One. All three acts of the play take place in a dining room of a fairly large suburban house, belonging to a prosperous manufacturer Mr Birling. Mr Birling is holding a dinner party to celebrate his daughter's engagement. A police inspector intrudes, investigating the suicide of a young woman Eva Smith. Under interrogation, the police inspector finds out that every member of the family turns out to have a shameful secret which links them with Eva's death. The play was written in 1945 at the end of World War Two. ...read more.

a former employee of Birlings and company and had been sacked from the factory by mr birling himself for wanting a small wage rise, Mr Birling obviously refuses "It's my duty to keep labour costs down". He turns a bit defensive and still doesn't take any blame for Eva's Death "Still I can't accept any responsibility. He also seems to be a bit capitalist concerned about money and profits, not people "Working together -for lower costs and higher prices" This shows me he is a wealthy man especially with that motto and that, that was all he really cared about. He is big headed because he thinks because he is wealthier than everyone else he is sure that he will not be in the war "Some people say wars inevitable. And to that I say- fiddlesticks!" J.B Priestley does this to show the audience that Mr Birling is well off as well as powerful. The Inspector arrives in a very peculiar way. ...read more.

He turns a bit defensive and still doesn't take any blame for Eva's Death "Still I can't accept any responsibility. If we were responsible for everything that happened to everybody .... It would be very awkward, wouldn't it?" Even though the inspector has arrived Mr Birling is still pig headed. During the course of the inspectors stay Mr Birling thinks the inspector is a fake "a socialist or more sort of crank". The inspector leaves the scene leaving the Birlings with something to think about "One Eva Smith has gone, but there are still millions left, with their lives, their hopes and fears. We don't live alone. We are responsible for each other, if men will not learn that lesson they will be taught it in fire, blood and anguish". The Inspector walks straight out, leaving them staring, subdued and wondering, with Shelia quietly crying and Mr Birling checking the inspector had left by ...read more.