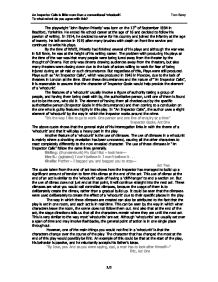 The playwright 'John Boyton Priestly' was born on the 13th of September 1894 in Bradford, Yorkshire.

The playwright 'John Boyton Priestly' was born on the 13th of September 1894 in Bradford, Yorkshire. He ended his school career at the age of 16 and decided to follow his passion of writing. In 1914, he decided to serve for his country and joined the infantry at the age of twenty. He left service in 1919 after many brushes with death on front line service and continued to write his plays. By the time of WWII, Priestly had finished several of his plays and although the war was in full force, he was at the height of his writing career. The problem with producing his plays at the time of the war was that many people were being lured away from the theater by the thought of Cinema. Not only was cinema drawing audiences away from the theaters, but also many theaters were closing down due to the lack of actors willing to work for fear of being injured during an air raid or such circumstance. But regardless of this, Plays were still produced. Plays such as "An Inspector Calls", which was produced in 1945 in Moscow, due to the lack of theaters in London at the time. ...read more.

"(miserably) So I'm really responsible?" Sheila, Act One She is very disappointed about this turn of events and this quite notably affects her character. The rest of the play has her character feeling upset and apart from at the very end of the play, her character does not become any happier. Some of the characters have progressed from a state of ignorance to their surroundings to a state of knowledge. Most notably is Mr Birling. His character changes from a state of not knowing what the effect of his actions were to a state where he would rather not know what the action's effect was. The progression is well noted throughout the acts. "Rubbish! If you don't come down sharply on some of these people, they'd soon be asking for the earth." Birling, Act One This quote shows us how he is completely oblivious of how this minor occurrence could possibly have caused the death of the girl. "Possibly. But you weren't asked to come here to talk to me about my responsibilities." Birling, Act Two We see in this quote that he is starting to realise what the inspector is telling him about how his actions fit into the death of the girl, but he still does not believe what he is being told. ...read more.

This could possibly be a comment on the fact that it was written during the war, which was a time when many people could commit dire crimes and yet only one person would be blamed. The audience would probably feel that the play shows how justice can be served to all those responsible for the disgraceful act of allowing this girl to commit suicide, and that they were all just as guilty. I feel that "An Inspector Calls" is very far from a conventional 'whodunit', in that the depth of the characters stories, and the intricacy of them all is something that 'whodunit's simply do not require. The things like the character of the inspector being some form of manifestation of guilt is what would probably be the deciding factor. And regardless of the play including elements of a 'whodunit', the way in which the characters develop in the play, and the main factor that they are all guilty, would make it very much more than a conventional 'whodunit'. An Inspector Calls is little more than a conventional 'whodunit'. Tom Barry To what extent do you agree with this? 1/3 ...read more.