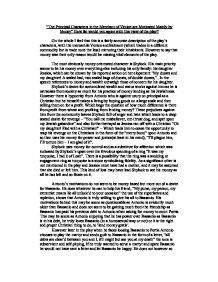 &quot;The Principal Characters in the Merchant of Veniceare Motivated Mainly by Money&quot; How far would you agree with this view of the play?

"The Principal Characters in the Merchant of Venice are Motivated Mainly by Money" How far would you agree with this view of the play? On the whole I feel that this is a fairly accurate description of the play's characters, with the mercantile Venice and Belmont (which trades in a different commodity but is trade none the less) mirroring their inhabitants. However to say that money was their only reason would be missing vital elements of the play. The most obviously money orientated character is Shylock. His main priority seems to be his money over everything else including his only family: his daughter Jessica, which can be shown by his reported action on her elopement "My ducats and my daughter! A sealed bad, two sealed bags of ducats, of double ducats,". In the speech references to money and wealth outweigh those of concern for his daughter. Shylock's desire for accumulated wealth and status works against him as he is ostracises from society as much for his practice of money lending as his Jewishness. However there is hypocrisy from Antonio who is against usury on principal as a Christian but he himself makes a living by buying goods on a large scale and then selling them on for a profit. ...read more.

This may be scene as Antonio enjoying that he has power over Bassanio as Bassanio is in his debt, he truly loves Bassanio (in a homosexual way or not) or it is the right and proper Christian thing to do, to 'lend money gratis'. However later in the play when he faces loosing Bassanio to Portia Antonio chooses to play the martyr and sends guilt to Bassanio in the form of a letter, "all debts are clear'd between you and I, if I might but see you at my death" the tone is subservient and self pitying, If he truly wanted to serve a martyr and spare Bassanio he would not have sent a letter and let Bassanio be happy. He does not however so this might be scene as Antonio trying to reassert his dominance or regain his once dear friend. Antonio is similar to Shylock as he asserts his revenge at the end of the court scene for Shylock's attempted murder of him by taking away all his money and making him convert to Christianity, which is possibly one of the cruellest things he could have done, and made worse as it was in the name of justice and mercy. ...read more.

Portia however possibly has the same prejudices as the rest of the court. In the court scene she is portrayed like blind justice or a nemesis figure, dealing out judgment and justice, but she may be motivated with revenge and hate against Shylock like the rest of the Venetian court. Portia would not want to see Antonio die and the guilt that Bassanio would suffer as a result would ruin their marriage, and on a less self centred note she would feel it was her duty to help Antonio as he is Bassanio's friend and as the married couple are supposed to be half of the same whole, he is her friend too. Many Literary works try to deal with the concepts of love and money as conflicting concepts; however Shakespeare seems to take a more unusual approach by making the two not mutually exclusive, treating love as just another form of wealth. He seems to say that they are blessing to those who pursue them in the right intent. Those who are too possessive, too greedy, will never get pleasure from neither the pursuit of love not from the accumulation of wealth. Bassanio who seeks Portia's love and happens to solve his money problems is in contrast with Shylock who is a miser who hordes both his gold and his love and so looses his daughter and his riches simultaneously. ...read more.