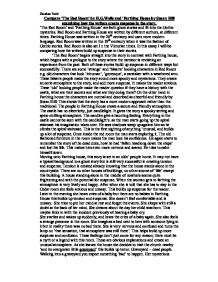 'The Red Room' and 'Farthing House' are both ghost stories and fit into the Gothic mysteries. Red Room and Farthing House are written by different authors, at different times. Farthing House was written in the 20th centaury and uses more modern language. Red Room was written in the 19th centaury when it was the fashion of Gothic stories. Red Room is also set I n the Victorian times. In this essay I will be comparing how the writers build up suspense in their stories. 'The Red Room' begins straight into the story in contrast with Farthing house, which begins with a prologue to the story where the narrator is revisiting an experience from the past. Both of these stories build up suspense in different ways but successfully. There are some 'strange' and 'bizarre' looking characters in Red Room e.g. old characters that look 'inhuman', 'grotesque', a caretaker with a weathered arm. These bizarre people make the story sound more spooky and mysterious. They create an eerie atmosphere to the story, and add more suspense. It makes the reader anxious. These 'old' looking people make the reader question if they have a history with the castle, what are their secrets and what are they doing there? ...read more.

As she leaves the house she decides to visit the church nearby 'and its overgrown little graveyard' this builds up terror. Graveyard - dead people. Walking into a graveyard you expect something 'bad' to happen. Her mysterious encounters seem to come to sense slowly but not all explained. She discovers some gravestones, graves of babies. They somehow fit in with the event that had taken place in Farthing House. Suspense is incredibly high at this time. Everyone wants answers. All the graves are of young families. It makes the woman think that there may have been a disease that spread at the time. 'Dreadful epidemic in the village?' There is a lot of confusion and mystery, both creating tension. She learns that the house was for young women and their illegitimate babies. Many mother and babies were killed - that explained the gravestones and explained the 'encounter' she had back at the house. She remembers the woman 'again that terrible sadness and distress'. The tension in the story slowly starts to sink now that the woman and the reader know the true reason why the woman (ghost) was there. In the epilogue it's mentioned Farthing House had been demolished for a new development. ...read more.

The common theme running through both of these stories is that of fear. Both stories were about ghosts. At the end of The Red Room we find out that there is no ghost and it was a setup to scare the person. In Farthing House Mrs. Flower believes that she did see a ghost and revisits the event to rationalize her experience of Farthing House. Both writers use language to create suspense through the stories. Also the use of unusual characters like in Red Room the man with the withered arm. The settings of the stories create suspense. Red Room is set in a old castle which is a typical setting for ghosts stories and Farthing House is set in a old Victorian building. In conclusion, both authors have been very successful in building up suspense. They both took different approaches but they got what they set out to achieve. They both have elements, which help make a good ghost story. I think Red Room is more effective and successful in creating suspense than Farthing House but Farthing house sounds more believable. ?? ?? ?? ?? Zeeshan Farid Compare 'The Red Room' by H.G.Wells and 'Farthing House by Susan Hill examining how the writers create suspense in the story. ...read more.