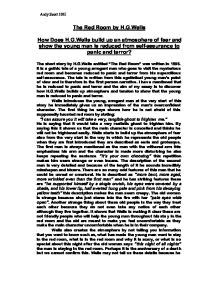 The Red Room by H.G.Wells - How Does H.G.Wells build up an atmosphere of fear and show the young man is reduced from self-assurance to panic and terror?

The Red Room by H.G.Wells How Does H.G.Wells build up an atmosphere of fear and show the young man is reduced from self-assurance to panic and terror? The short story by H.G.Wells entitled "The Red Room" was written in 1896. It is a gothic tale of a young arrogant man who goes to visit the mysterious red room and becomes reduced to panic and terror from his supercilious self-assurance. The tale is written from this egotistical young man's point of view and is therefore in the first person narrative. I have mentioned that he is reduced to panic and terror and the aim of my essay is to discover how H.G.Wells builds up atmosphere and tension to show that the young man is reduced to panic and terror. Wells introduces the young, arrogant man at the very start of this story he immediately gives us an impression of the man's overconfident character. The first thing he says shows how he is not afraid of this supposedly haunted red room by stating: "I can assure you it will take a very, tangible ghost to frighten me." He is saying that it would take a very realistic ghost to frighten him. ...read more.

Perhaps it is the anniversary of a death but we cannot confirm this. Wells may not tell us these details because he knows that people are most scared of things they do not understand and if he gave away these details the tension would be lost. The elderly people could be attempting to stop this man seeing the red room for some reason but if they are trying to do this they fail because he goes anyway. The young man may not want to go to the red room but because of his pride he cannot afford to back down from what he said he would do. Wells makes the description of the man's route to the red room very long and meticulous this makes it seem as though he will be nowhere near the old people or anybody else whilst he is in the red room so he will have no one to help him if he is in danger. As soon as the man leaves the room he is becoming more fearful this is shown when he is leaving the room because he won't set off in the dark and waits until the candle is well lit. ...read more.

The man soon becomes "frantic with the horror or the coming darkness" and is panicking completely. As the man tries to flee the room in his fear he forgets where the door is this shows just how scared he is. He is knocked unconscious because of his panic. When the petrified young man awakens the spectral elderly people surround him. They start to question him about his experience in the red room and he admits the room is haunted, they assume it is a ghost occupying the red room but the young man disagrees it was neither a ghost or the old earl nor his poor countess but fear itself it what was lurking in there. The young mans experience has made him be arrogant no longer and will forever be afraid of fear. Wells may be suggesting through this story that we are not afraid of the things we understand but the things we don't and our imagination makes the scenario much worse than it could possibly be, also that we create the fear in our imaginations. Throughout this story Wells has succeeded in creating tension and fear and representing how the young man is reduced to panic and terror. The story will be forever brilliant and gripping. ?? ?? ?? ?? Andy Scott 10H ...read more.