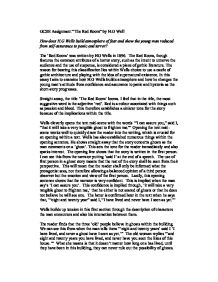 GCSE Assignment "The Red Room" by H.G Well How does H.G Wells build atmosphere of fear and show the young man reduced from self-assurance to panic and terror? The 'Red Room' was written by HG Wells in 1896. The Red Room, though features the common attributes of a horror story, such as the intent to unnerve the audience and the use of suspense, is considered a piece of gothic literature. The reason for bearing this classification lies within Wells choice to use a castle of gothic architecture and playing with the idea of supernatural existence. In this essay I aim to examine how H.G Wells builds atmosphere and how he changes the young man's attitude from confidence and assurance to panic and hysteria as the short-story progresses. Straight away, the title 'The Red Room' looms. I feel that in the title, the most suggestive word is the adjective 'red'. Red is a colour associated with things such as passion and blood. This therefore establishes a sinister tone for the story because of the implications within the title. Wells cleverly opens the text mid-scene with the words '"I can assure you," said I, "that it will take a very tangible ghost to frighten me."' Opening the text mid-scene works well to quickly draw the reader into the writing, which is crucial for an opening within a text. ...read more.

The word 'droning' makes us feel that someone is talking slowly, with a low dreary pitch. This gives the reader the feeling that he is bored with the old people. I also get the feeling he is still relaxed with he prospect of going to the red room as he explains 'I put down my empty glass on the table' this shows that he is feeling casual and unaffected by the old people as he shows no signs of being nervous. This said, as the opening section progresses the confident man for the first time notices shadows. Wells describes the shadow as 'monstrous' and personifies the shadow as it 'mocked' the old man's actions. The word monstrous implies that it is scary. The fact that Wells personified the shadow makes the audience feel like it is a living presence, such as a ghost. This idea that shadows or, the absence of light, is what creates fear and therefore represents the ghost is developed by Wells through the text. Just before the man goes up to the red room, Wells reinforces many of the ideas in the opening section. For example, he still shows the man to be confident. This is shown when he said he would make himself 'comfortable' in the red room. This shows his disbelief of ghosts, as if he did believe there was one; he would not think that he would be comfortable. ...read more.

A 'barricade' is usually used in war. This shows that the first person is becoming so fearful he is sub-consciously preparing for a skirmish. He becomes ever more wary of the possibility of a ghost as he mentions frequently not only the shadows of the room 'shifting' and 'stirring' (these are words which could be used to describe ghosts) but he also begins to think of actual 'ghosts'. He explains that he tries to reassure himself of the 'impossibility of ghosts' and the 'legend of the place'. This shows he is becoming paranoid of ghosts and the legend. His behaviour becomes more extreme as his belief in the ghosts does. He tries to rid the room of darkness, and so goes to get candles from the hall and 'returned with as many as ten'. This bizarre behaviour created by the writer builds up the reader to thinking: why is the character so intense that he needs to resolve to such behaviour? This is exactly what the woman was doing at the very beginning of the story: using the light of the fire as security. It could be argued the man would no longer feel the woman's actions to be strange, but understandable. H. G Wells begins to build up to the climax when the first candle goes out. The first candle to go out was in the alcove: this would have confirmed to the audience and to the man that there was a ghost. ...read more.