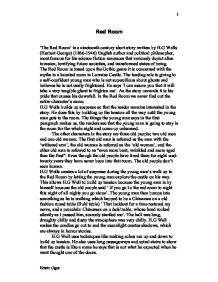 'The Red Room' is a nineteenth century short story written by H.G Wells

Red Room 'The Red Room' is a nineteenth century short story written by H.G Wells (Herbert George) (1866-1946) English author and political philosopher, most famous for his science fiction romances that variously depict alien invasion, terrifying future societies, and transformed states of being. The Red Room is based upon the Gothic genre it is concerned with the myths in a haunted room in Lorraine Castle. The leading role is giving to a self-confident young man who is not supercilious about ghosts and believes he is not easily frightened. He says 'I can assure you that it will take a very tangible ghost to frighten me'. As the story unravels it is his pride that causes his downfall. In the Red Room we never find out the entire character's name. H.G Wells builds up suspense so that the reader remains interested in the story. He does this by building up the tension all the way until the young man gets to the room. The things the young man says in the first paragraph makes us, the readers see that the young man is going to stay in the room for the whole night and come up unharmed. ...read more.

He also uses long passageways and spiral stairs to show that the castle is like a maze he says that is not what he expected when he went thought one of the doors. ' A shadow came sweeping up after me' H.G Wells suggests to the reader that there is something or someone following him. By now the young man is not as brave as he was before. The best trick H.G Wells used was absolute silence because you will never know what's going to happen next. H.G Wells builds up tension all the way up to the peak. As the young man enters the red room he closes the door behind him and locks the door. H.G Wells uses red because when we think of red we think of danger. The young man remembers the legends and stories regarding the room. The room is a large, shadowy room with a lot of hidden areas H.G wells uses hiding areas because the reader doesn't know what going to come out from the hidden area. ...read more.

The old man says to him 'you believe now that the room is haunted.' He then goes on to say 'it is the thing that haunts poor mortal man and that is, in all its nakedness- Fear!' H.G Wells chooses fear because it had no sound, shape, form, or light. This is a story like no other I thing the idea behind the story is that H.G Wells wanted to tell us that fear is the most scariest thing to frighten humans because when the young man started getting scared fear was with him. The Red Room is a good story I enjoyed doing work on it. Light is very symbolic in the Red Room it represents safety it helps to claim tension. The young mans relationship with the old people help him because the old people look after him and bandaged his head. We discover that ghosts do not haunt the Red Room. It is fear that haunts the Red Room and that fear cause the young man's reactions. At the start of the story the young man says 'I can assure you that it will take a very tangible ghost to frighten me'. 2 Edwin Ogoe ...read more.