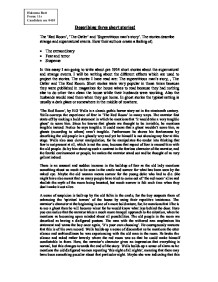 The 'Red Room', 'The Ostler' and 'Superstitious man's story'.

Describing three short stories! The 'Red Room', 'The Ostler' and 'Superstitious man's story'. The stories describe strange and supernatural events. How their authors create a feeling of; * The extraordinary * Fear and terror * Suspense In this essay I am going to write about pre 1914 short stories about the supernatural and strange events. I will be writing about the different effects which are used to project the stories. The stories I have read are: The superstitious man's story, , The Ostler and The Red Room. Short stories were very popular in those times because they were published in magazines for house wives to read because they had nothing else to do other then clean the house while their husbands were working. Also the husbands would read them when they got home. In ghost stories the typical setting is usually a dark place or somewhere in the middle of nowhere. 'The Red Room', by H.G Wells is a classic gothic horror story set in the nineteenth century. Wells conveys the experience of fear in 'The Red Room' in many ways. The narrator first starts off by making a bold statement in which he mentions that 'it would take a very tangible ghost' to scare him. Since he knows that ghosts are thought to be invisible, he mentions tangible instead. Notice he says tangible. It could mean that a ghost wouldn't scare him, as ghosts (according to others) ...read more.

Again H.G Wells is cutting the sentences short to make them more lively and interesting. The way HG Wells describes the light and the darkness in contrast and how the light seems like a small island in and ocean of sea really creates that atmosphere and makes the reader yearn for more. It is also quite interesting how he describes the room as germinating darkness. Again, to put himself at rest he examines the room, checking the chimneys and tucking the valences of the bed. So here he feels fearful of what is going to happen and reassures himself by ensuring that everything is in order. He also walks around the room and checks for any bodies behind the furniture. He also dealt with the fear by lighting candles, so much so that the entire room was filled with light. He also took the precaution of barricading the door to stop any intruders from entering. Again, he shows the total opposite of his brash character at the beginning of the story and places a revolver out 'ready to hand'. The narrator now experiences fear by his echoing sound and the crackling of the fire. At first the narrator was fearful of the noises he heard but later describes how he was feeling fear from the silence and solitude overcome by the room. It seems that the narrator deals with fear by satisfying himself - for again he walks with a candle into one corner of the room because he feared something tangible lurking in the darkness. ...read more.

He was asked if he now believes that the Red Room is haunted. Everything changes, his attitude toward the whole matter is now of a positive one. He replies, 'Yes, the room is haunted'. So at first his conscious at the beginning of the story told him that none of this rubbish ever existed, and he comes out of the Red Room finally admitting to what he had witnessed. It was thought that the ghosts of the earl and countess were haunting the room, but they were mistaken, for he described that it was the sheer nakedness of fear in its darkest form which brought about this myth. The narrator says that it followed him through the corridor and fought against him in the room. He describes this fear as not having light nor sound, fear that is beyond reasoning. He then abruptly stopped speaking as he lifts his hands up to his head in pain. Then, finally, the old man speaks out with fear and describes how the darkness lurks behind the curtains, creeps along the corridor at dusk, right behind you, 'so that you dare not turn'. Wells uses a mixture of short and abrupt sentences and the personification of the shadows, which plays a big role, all in an exciting attempt to convey the experience of fear in the Red Room. Wells leaves a nail-biting ending as the old man states that it is, fear, 'black fear' which haunts that room and will remain 'so long as the house of sin endures'. ...read more.