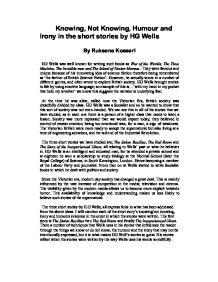 The red room, the stollen bacillus and the inexperienced ghost

Knowing, Not Knowing, Humour and Irony in the short stories by HG Wells By Ruksana Kossari HG Wells was well known for writing such books as War of the Worlds, The Time Machine, The Invisible man and The Island of Doctor Moreau. They were famous and unique because of his innovating idea of science fiction therefore being remembered as 'the farther of British Science Fiction'. However, he actually wrote in a number of different genres, and often wrote to explore British society. HG Wells brought stories to life by using emotive language; an example of this is...'with my hand in my pocket that held my revolver' we know this suggests the narrator is underlying fear. At the time he was alive, called now the Victorian Era, British society was dreadfully divided by class. HG Wells was a Socialist and so he wanted to show that this sort of society was not even-handed. We can see this in all of his stories that we have studied, as in each one there is a person of a higher class that needs to learn a lesson. Society was more repressed than we would expect today, they believed in control of excess emotion; being too emotional was, for a man, a sign of weakness. The Victorian British were more ready to accept the supernatural, but also living at a time of engineering advances, and the tail end of the Industrial Revolution. The three short stories we have studied are; The Stolen Bacillus, The Red Room and The Story of the Inexperienced Ghost, all relating to Wells' past or what he believes in. HG Wells is an intelligent and educated man, for he attended a private school and at eighteen he won a scholarship to study biology at the Normal School (later the Royal College) ...read more.

The Red Room: In The Red Room, the narrator is perceived as a Victorian upper class gentleman who represses his emotions but loses control of his emotions by the end, when he sneers at the elderly custodians. In connection with men in that era, when they had the idea that one should control their emotions, this issue became so sever that it has become an illness named 'hysteria'; a sign of excess which challenges this cultural code. There are many things that we don't know while reading the short story of The Red Room, especially when the narrator cannot be identified by the reader. Another anonymous theory that occurs in the story is that whether or not the 'haunted room' is even haunted, in addition towards thought of whether there really was a ghost until the very end. Wells uses this way of engaging the reader by keeping then in suspense throughout the whole story. Throughout the story the narrator does not want to know because he always blocks his emotions. This is backed up by the following quote when he waits 'until the candle was alight', but on front of the old people (who live in the castle) he expressed that he does not believe in ghosts. Until the very end of The Red Room the narrator couldn't cope with his rising fear that he detonates into screaming while 'shutting' his eyes and 'flung out his arms in vain effort' around the room. It is revealed to the reader, at the end, that The Red Room was not haunted at all, but it was inundated by the naked fear the 'nakedness-Fear' which mentions its power 'that deafens and darkens and overwhelms'. ...read more.

Then Clayton gets annoyed at the ghost for not every being a member of the Mermaid Club and not having the right to have a 'run at the Mermaid Club', but not over the fact that he is a restless ghost. This is because of the class separation was very narrow in the Victorian era where there was the idle rich and the socialist opinion but on the other side of the scale there is the very poor, especially that a huge majority of the people in England were living in poverty. Another example of irony is that Clayton dies despite his friends not believing his story; he proves to his friends that his story was true by dying mysteriously. In conclusion modern technology has been accused for the disappearance of many great novels in time and the dramatic increasing usage of the internet, radio, television or any other forms of major media influences. Hg Wells book are still very popular with many reader for his unique style and creativity as well as his technique to inform us of socialist opinions and Victorian way of life. Giving us a great insight into what people of his time thought and believed within all of his stories; on top of that he uses humour and irony to great effects. The other effect Wells uses suspense and unresolved conclusions with twists until the very end, which keeps the reader interested throughout by involving them into the story by teasing them into thinking they know what is going to happen next. HG Wells is a multitalented writer for he has the ability to write across different genres which allows to gain more interest from a wide spread of audiences from both modern society and Victorian era. ...read more.