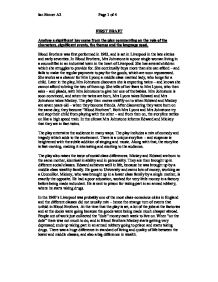 The scene that I have chosen (Act One, Pages 36-38) shows the Johnstone families' poverty - and how the society at the time looks down on them. The policeman is also a prime example of this

FIRST DRAFT Analyse a significant key scene from the play commenting on the role of the characters, significant events, the themes and the language used. Blood Brothers was first performed in 1983, and is set in Liverpool in the late sixties and early seventies. In Blood Brothers, Mrs Johnstone is a poor single woman living in a council flat in an industrial town in the heart of Liverpool. She has several children which she struggles to provide for. She continually buys more than she can afford - and fails to make the regular payments to pay for the goods, which are soon repossessed. She works as a cleaner for Mrs Lyons; a middle class married lady, who longs for a child. Later in the play, Mrs Johnstone discovers she is expecting twins - and knows she cannot afford to bring the two of them up. She tells of her fears to Mrs Lyons, who then asks - and pleads, with Mrs Johnstone to give her one of the babies. Mrs Johnstone is soon convinced, and when the twins are born, Mrs Lyons takes Edward and Mrs Johnstone takes Mickey. The play then moves swiftly on to when Edward and Mickey are seven years old - when they become friends. After discovering they were born on the same day, they become "Blood Brothers". Both Mrs Lyons and Mrs Johnstone try and stop their child from playing with the other - and from then on, the storyline rattles on like a high speed train. ...read more.

At the end of his song I would have a huge percussion build up using a variety of instruments, getting louder and louder, and then coming to a sudden stop. Simultaneously, I would have a sudden lighting change from the Narrator to the children on the street. The next section of the scene involves the children shooting at the park statue with the air gun. This evolves a theme of violence in the play which continually crops up later on. Linda is delighted that she hits every time, and Edward and Mickey miss. This is a recurring problem for the two males later on in the play, when they have little or no success with guns. First of all, Mickey is caught taking part in an armed robbery and is put into prison. Then right at the end, Mickey accidentally sets off a gun, which kills Edward. The only real sound effect that is necessary is a realistic gun sound when they are firing at the statue in the park. When they are shooting I would put some red lights on to show the impending danger; and turn them off when the gun goes away, only for them to turn back on when they pick up the stones. The following section of my chosen scene is the 'throwing stones'. Their different classes are portrayed strongly here with the language that Edward and Mickey uses. Mickey uses incorrect English: "Ooh, I dare y' Linda, I dare y'". ...read more.

My chosen character is Linda. Her role in my chosen scene is to show her control and dominance over the two boys. She is always successful with the gun and is delighted when Edward and Mickey miss: "Missed!". She seems to be the initiator of all the rule-breaking; she provokes the violence in the scene: "Lets throw some stones through them windows". This is the first sign of the violence that brings the play to end in tragedy. This is because the friendship between Edward and Mickey weakens when they both start to love Linda. In my chosen scene, Edward and Mickey are just great friends with Linda; but as their love for her starts to grow, the links between the two boys become more and more dangerous. It is Mickey's love of Linda that drives him to kill Edward because he thinks Edward is going to run off with her. In a way, Linda's dominance over the two boys in my chosen scene, and the way Edward and Mickey just do whatever she wants, foreshadows what is to happen at the end of the play. Conclusion The role of the characters to represent their class, the themes of class and violence that are used and the different language of the characters all combine to make a hugely successful, exciting and unique play. Russel creates unique and contrasting characters to make the play very exciting. The effect on the audience Word Count: 1845 ?? ?? ?? ?? Ian Binner A2 Page 1 of 4 ...read more.