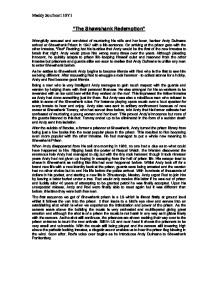 "The Shawshank Redemption" Wrongfully accused and convicted of murdering his wife and her lover, banker Andy Dufresne arrived at Shawshank Prison in 1947 with a life sentence. On arriving at the prison gate with the other inmates, "Red" Redding bet his buddies that Andy would be the first of the new inmates to break that night. Andy would prove him wrong many times over the years. Although pleading innocent, he quickly adapts to prison life keeping himself quiet and reserved from the other inmates but prisoners and guards alike are soon to realise that Andy Dufresne is unlike any man to enter Shawshank before. As he settles to Shawshank Andy begins to become friends with Red who is the first to see him as being different. After requesting Red to smuggle a rock hammer - to collect stones for a hobby, Andy and Red become good friends. Being a man who is very intelligent Andy manages to gain much respect with the guards and warden by helping them with their personal finances. He also arranged for his co-workers to be rewarded with an ice cold beer whilst they worked on the roof. This impressed the fellow inmates as Andy had done something just for them. But Andy was also a rebellious man who refused to stick to some of the Shawshank rules. ...read more.

It then leads to a bird's eye view and serves into an establishing shot which is when we experience the intimidation and power of the prison. As the camera soars above the building the music is very orchestral and multilayered giving great emotion and although the shot is of a prison the music is not harsh in any way as it glides freely with the camera. As the shot still continues, the prisoners are shown making their way over to the prison entrance to taunt the new arrivals. Still in LS and over head it shows the prisoners to be very small and vulnerable. With the music still being played and the camera still towering high above the pathetic looking inmates, a diegetic sound enables us to hear the prison flag blowing in the wind. Soon after, Red's voice over begins as he introduces Andy Dufresne to Shawshank Penitentiary. Red's voice over follows over to the first cut of the interior of the prison van. The music quietens as a MS of Andy sitting at the back of the van begins to gradually lead into a CU. His face is completely expressionless as the van enters the prison gates. The next cut is a tracking shot of Red showing him jogging across the prison courtyard to greet his fellow inmates. As he greets them the camera angle lowers giving Red a sign of authority and to show him to be an important character. ...read more.

The feet slowly become closer to the camera; at this point no faces are seen just the feet of the prisoners. A cut then shows them all in a dark room with only small barred windows letting in little light. As the guard tells them to do so, the prisoners turn to face the front. This is followed by a diegetic sound of the door slamming shut showing there is no escape now and they are actually inside there new home. A MS of the prison warden is filmed directly in front of him showing that he is good, honest man. He asks if there are any questions to be answered from the new arrivals. One man asks "when do we eat?" Instead of getting a decent answer a guard approaches him and uses abusive language against him then kicks him. As he kicks him diegetic sounding is used to add the sound of the "thump". The governor is then shown again completely straight faced. He holds out a bible to prove his honesty and goodness. He ends his speech with a smile and says "welcome to Shawshank." This phrase although sounding friendly is telling the prisoners that they are actually there and it's no longer a nightmare but reality. This opening scene we get of Shawshank Prison itself completely sets the mood and gives the viewer an introduction to the film. It gives a brief outlook of the main characters and provides a good understanding to the plot. Maddy Southcott 10Y1 ...read more.