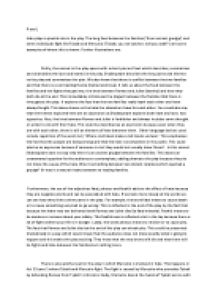 ﻿R and j Hate plays a pivotal role in the play. The long feud between the families (?from ancient grudge?) and when individuals fight like Tybalt and Mercutio (?Tybalt, you rat-catcher, will you walk??) are some examples of where this is shown. Further illustrations are: Firstly, the sonnet in the play opens with a short piece of text which describes, summarises and dramatises the love and hatred in the play. Shakespeare describes the key points and themes to the play and summarises the plot. We also know that there is conflict between the two families and that there is a contrasting theme (hatred and love). It tells us about the feud between the families and the fights they get into, the love between Romeo and Juliet (destiny) and how they both die at the end. This immediately introduces the disgust between the families that there is throughout the play. It explores the fact that the two families really loath each other and have always fought. This alone shows us the hate the characters have for each other. You could also say that the themes explored here are an oxymoron as Shakespeare explores both hate and love, two opposites. ...read more.

This could be presented dramatically in a way which would mean that the audience does not know exactly what is going to happen and this makes the play exciting. They know that the two lovers will die and that there will be fights and hate between the families but nothing more. There is also another part in the play in which Mercutio is involved in hate. This happens in Act 3 Scene 1 where Tybalt and Mercutio fight. The fight is caused by Mercutio who provokes Tybalt by defending Romeo from Tybalt?s criticisms. Sadly, Mercutio dies at the hands of Tybalt and so with revenge in his sight Romeo fights and kills Tybalt. The fact that this play has many fight scenes shows the interest that the Elizabethan audience had for violence and bloodshed. Any audience likes to see fights and so for a play to be good and worthy of watching it must have violence. Shakespeare would have known this and this is probably why he added so many fight scenes, other than to add drama and to show the contrast in themes. This scene shows that the two houses still have their differences and hate each other. ...read more.

Furthermore, the language used by Mercutio can be a connotation of many things. The word plague can be associated with death, pain and misery. This seems to be a perfect reflection of what happens at the end of the book: the death and pain that Romeo and Juliet went through and the pain and misery that the houses went through. Shakespeare raises the issue of hatred in this section by writing Mercutio?s part in an angry way. Mercutio curses Romeo and everyone else at the scene of his death. Shakespeare also uses a lot of negative words in the text like plague and pain. This also brings more hatred into the play. Shakespeare may have done this to emphasise how passionately both families hate each other. A killing on each side of the family shows that hate is a base for the play. The fighting also builds up tension making the play a lot more interesting and it detracts from the other theme: love. This varies the play and also makes it more appealing. In conclusion, this play obviously has more hatred than first impressions give. This hatred is portrayed in a number of ways including the language of the play and how it is spoken and acted. Overall, it seems that every time love surfaces it is drowned with hatred. ...read more.