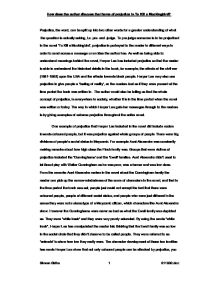 The theme of prejudice in To kill a mocking bird

Prejudice, the word, can be split up into two other words for a greater understanding of what the question is actually asking, i.e. pre- and -judge. To pre-judge someone is to be prejudiced In the novel 'To Kill a Mockingbird', prejudice is portrayed to the reader in different ways in order to send across a message or an idea the author has. As well as being able to understand meanings behind the novel, Harper Lee has included prejudice so that the reader is able to understand the historical details in the book, for example; the effects of the civil war (1861-1865) upon the USA and the effects towards black people. Harper Lee may also use prejudice to give people a 'feeling of reality', so the readers feel as if they were present at the time period the book was written in. The author could also be telling us that the whole concept of prejudice, is everywhere in society, whether it is in the time period when the novel was written or today. The way in which Harper Lee gets her messages through to the readers is by giving examples of extreme prejudice throughout the entire novel. One example of prejudice that Harper Lee included in the novel did include racism towards coloured people, but it was prejudice against whole groups of people. ...read more.

I also think that here, the author is trying to speculate how judgmental and narrow - minded, not only children, but adults can be by calling him "different". When the residents of Maycomb call someone different, the reader is lead to think that the "different" character just does not think or act like the other citizens of Maycomb, and therefore they are goals for prejudice. Harper Lee also suggests to the reader, to be judgmental of a character of Boo Radley's nature is expected of not only residents in Maycomb, but in general it is human nature. Even though a fair majority of the Maycomb residents are severely prejudice, there are a few people who look beneath the surface of different individuals and groups. For example, Atticus. Even though Atticus does make comments about being "common" this character is presented in the novel to be wise understanding of most situations. He does not judge anyone by their race, religion, views or anything else that makes them different. He does not seem to be in favour the racist attitudes in Maycomb and sees them be like a "disease". From understanding the context the word is used in, Harper Lee proposes to the reader that the prejudice in Maycomb spreads from one character to another. Miss Maudie also has some non- prejudiced views by saying that she is proud of "those people in this town who say that fair play is not marked white only." ...read more.

Atticus knew that although he was going to defend Tom Robinson to the best of his abilities, he would not be able to succeed due to the prejudice the town showed against coloured people. Harper Lee included aspects like the reaction of Mrs Dubose towards Atticus working for a black man to show how extreme people's views were back in the beginning half of the 20th century, therefore she is able to show the reader what it could have been like if they were a person of different race. But as well as racism in Maycomb, there was prejudice against others who were just simply 'different'. Overall, Harper Lee is trying to show the reader the reality of life, in the time period the novel was set. But one thing that I think Harper Lee was also trying to put across to the reader that reactions like this can take place anywhere there is a negative reaction to something different. She did this by adding prejudice in the first place, but also discussing it with the reader by using example of different people and then seeing reactions of the narrow- minded residents in Maycomb. I think that Harper Lee was trying to discuss the theme of prejudice by making it obvious to the reader how easily it can occur and how wrong it can be- ending up taking the lives of innocent people. How does the author discuss the theme of prejudice in To Kill a Mockingbird? Simran Sidhu 1 cw TKAM ...read more.