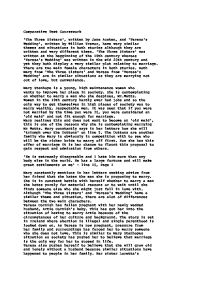 Comparative Text Coursework 'The Three Sisters', written by Jane Austen, and 'Teresa's Wedding', written by Willian Trevor, have very similar themes and situations in both stories although they are written and very different times. 'The Three Sisters' was written at the begginning of the 19th century whereas 'Teresa's Wedding' was written in the mid 20th century and yet they both display a very similar plot relating to marriage. There are two main female characters in both stories. Both Mary from 'The Three Sisters' and Teresa from 'Teresa's Wedding' are in similar situations as they are marrying not out of love, but convenience. Mary Stanhope is a young, high maintanance woman who wants to improve her place in society. She is contemplating on whether to marry a man who she despises, Mr.Watts. Women in the 19th century hardly ever had jobs and so the only way to get themselves in high places of society was to marry wealthy, respectable men. It was seen that if you were not married by the time you were 30, you were considered an 'old maid' and not fit enough for marriage. ...read more.

This has got her into the situation of having to marry Artie because of the circumstances of her culture and background. The story is set in Ireland where abortion is illegal and single parenthood is looked down on. As Teresa is now pregnant, pressure from her family and surroundings has forced her to marry someone who she does not love. This is similar to Mary Stanhopes situation as society has pushed her to believe that marriage is the only way for her to suceed in life. Teresa also pushes herself to believe that she will grow old and lonely without a husband because similar situations have happened to people in her family. Her sister Loretta's marriage had failed within weeks and her other sister, Agnes, had simply married to escape the town she was living in and hated. Teresa thinks she will end up like this and so partly accepts the marriage to Artie as a safe bet to feel secure about her future life. This is also similar to Mary's situation in 'The Three Sisters' because Mary's society and surroundings have lead her to believe that if you are not married by a certain age there is no hope for you in life. ...read more.

While Teresa is opimistic about her future life, Mary is opimistic because her marriage will bring her a much more wealthy and high society lifestyle than she had before. Both Teresa from 'Tersea's Wedding' and Mary from 'The Three Sisters' are marrying for convience, but there could always be a chance of love whilst married to the men they do not love. Mary Stanhope comes across as quite a high maintance, vain woman, who has high expectations of how her life should continue. The man eventually agree's to marry, Mr Watts, also comes across as a quite vain, arrogant man. With reasonably similar personalities, Mary Stanhope and Mr Watts could very well fall in love once they spend their married life together. This is also quite similar with Teresa and Artie Cornish. Although Teresa has had a marriage aranged for her with a man who she does not love, as married life together persists and they find out more about eachother, there could be love for them in the future. These two stories both highlight that fact that even though they were both written in completely different time periods, the culture and pressure on some women to marry is still exactly the same. Nina Ryner ...read more.