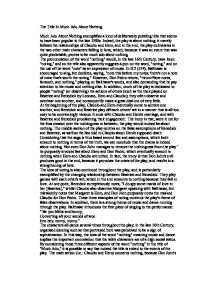 The Title In Much Ado About Nothing

The Title In Much Ado About Nothing Much Ado About Nothing exemplifies a kind of deliberately puzzling title that seems to have been popular in the late 1590s. Indeed, the play is about nothing; it merely follows the relationships of Claudio and Hero, and in the end, the play culminates in the two other main characters falling in love, which, because it was an event that was quite predictable, proves to be much ado about nothing. The pronunciation of the word "nothing" would, in the late 16th Century, have been "noting," and so the title also apparently suggests a pun on the word, "noting," and on the use of the word "note" as an expression of music. In II.2 (l.54), Balthasar is encouraged to sing, but declines, saying, "note this before my notes; there's not a note of mine that's worth the noting." ...read more.

The middle section of the play centres on the false assumptions of Benedick and Beatrice, as well as the lies told to Claudio about Hero's supposed death. Considering that the saga is thus based around lies and assumptions, which both amount to nothing in terms of the truth, we can conclude that the drama is indeed about nothing. Not even Don John manages to remove the nothingness from the play � he purposely invokes lies about Hero and Don Pedro, which eventually amount to nothing when Hero and Claudio are united. In fact, the irony is that Don John's evil produces good in the end, because it provokes the crisis of the play, and results in a strengthening of love. The idea of noting is also continued throughout the play, and is particularly exemplified by the changing relationship between Beatrice and Benedick. ...read more.

By considering these three different aspects of the word "nothing" in the title of "Much Ado," it is possible to say that indeed the title is suited to the events of the play. The main action (i.e.: Claudio and Hero) concerns nothing, because Don John's trick is a lie, as is Hero's apparent death; and yet Claudio creates much ado over both situations. In addition, Benedick and Beatrice spend much of the play observing, or noting, the actions, words and behaviour of each other (and also of Don Pedro, Claudio, Leonato and Hero, who set up a trick to try to unite them), and music plays an important role in this. Considering the close link between the three meanings of the word "nothing," particularly in the late 16th Century, I think that the title is an excellent description of the main events of the play. ...read more.

This essay meets - and quite often far exceeds - the expectations of high quality GCSE essay. The candidates shows an excellent appraisal of the title of 'Much Ado About Nothing' and the significance of it. They also demonstrate a ...

This essay meets - and quite often far exceeds - the expectations of high quality GCSE essay. The candidates shows an excellent appraisal of the title of 'Much Ado About Nothing' and the significance of it. They also demonstrate a highly proficient understanding of context, allowing their analysis to consider what the title of the play meant to it's original audience and to and audience of today. They show a great level of understanding with regard to the play's irony, and how this feeds back into play, producing a play that's still quite engaging and yet, dissolves down to quite literally, nothing.

The structure of the answer is good too, with a very strong introductory paragraph, a succinct and well-thought-through middle, and a nicely conclusive final paragraph. It feels as if the candidate has appropriately planned their answer and it has really paid off as the information is both engaging and insightful throughout, lending to easy digestion of the analysis.

The Level of Analysis is very good. The candidate makes numerous comments about the origin of the title and it's use in creating comedy for the play. There is a good understanding of the irony it presents and how the inconsequential farces in the play dissolve into "nothing". The candidate makes a good note of how even smaller themes like Don Pedro's scheme to blacken Hero's name also reveals itself to produce nothing but a few laughs at the hypocrisy of it all. An excellent essay with confident and perceptive analysis.

The Quality of Written Communication is very high. There are no cause for concerns with regards to the candidate abilities to use English in order to shape meaning for their analysis, and there is also good evidence the candidate is confident when analysing Shakespeare as the answer is written fluidly for the entirety.