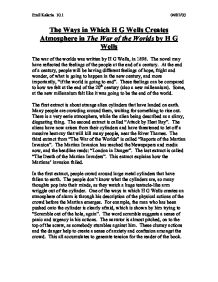 The Ways in Which H G Wells Creates Atmosphere in The War of the Worlds by H G Wells The war of the worlds was written by H G Wells, in 1898. The novel may have reflected the feelings of the people at the end of a century. At the end of a century, people will be having different feelings of hope, fright and wonder, of what is going to happen in the new century, and more importantly, "if the world is going to end". These feelings can be compared to how we felt at the end of the 20th century (also a new millennium). Some, at the new millennium felt like it was going to be the end of the world. The first extract is about strange alien cylinders that have landed on earth. Many people are crowding around them, waiting for something to rise out. There is a very eerie atmosphere, while the alien being described as a slimy, disgusting thing. The second extract is called "Attack by Heat Ray". The aliens have now arisen from their cylinders and have threatened to let off a massive heat-ray that will kill many people, near the River Thames. ...read more.

This shows H G Wells' use of onomatopoeia. Sight is expressed in several areas of episode 2 "white fog.....I saw them dimly, colossal figures of grey, magnified by the mist." This shows great danger. "Flashes of incandescent...a smoky dance of lurid flames...Shadowy faint" and in the sixth paragraph "white flashes....flames; the trees changed to fire". All of these examples lead to sight and colour imagery. H G Wells creates a sense of doom by putting the main character through a near-death situation. Tension gives way to relief in the last paragraph, because the main character escapes, and survives. The Martians' invasion is known throughout the country, and has now reached newspaper headlines. The whole country is on full alert and the city of London is in a very chaotic state. The atmosphere created in this episode has a sense of drams and excitement. "London in Danger", this gives a sense of urgency in the headline. H G Wells uses comparisons to show the awe and power of the Martian invaders in that he describes the invaders as "vast spider-like machines, nearly a hundred feet high, capable of the speed of an express-train". Wells also uses contrasting pairs to describe the power of the machine monsters when he writes "and that they could move swiftly and smite with such power". ...read more.

Tripling and alliteration of the letter "S" is also used to make the Martians seem menacing where it says "stark and silent....slain by the putrefactive and disease", which shows alliteration of the letter "S". Tripling is used where the extract says "were unprepared; slain as the red weed was being slain; slain, after all man's devices had failed", which shows H G Wells' use of tripling to construct a dramatic and reflective feel, which describes how the Martians were destroyed by a feeble bacteria. This seems very ironic that something so small had killed something so enormous and powerful. The tone at the end of the episode is very reflective on the nature of human life and death. "For neither do men live nor die in vain". The ranges of different atmospheres that are created by H G Wells are from tension, and fear, doom and destruction, but the final episode shows a strong sense of optimism, relief and reflection. H G Wells was trying to show what would realistically happen, if the world was taken over by Martian invaders. He is trying to express how he thinks the event would feel like, and all of this expressed with much detail. I think H G Wells' novel: "The War of the Worlds" still has the power to scare, build tension and excite a modern day audience, as it did to me. Emil Kalaria 10.1 04/07/03 ...read more.