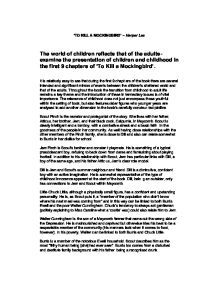 The world of children reflects that of the adults - examine the presentation of children and childhood in the first 9 chapters of &amp;#145;To Kill a Mockingbird&amp;#146;.

'TO KILL A MOCKINGBIRD' - Harper Lee The world of children reflects that of the adults - examine the presentation of children and childhood in the first 9 chapters of 'To Kill a Mockingbird'. It is relatively easy to see that during the first 9 chapters of the book there are several intended and significant mirrors of events between the children's sheltered world and that of the adults. Throughout the book the transition from childhood to adult life remains a key theme and the introduction of these intermediary issues is of vital importance. The relevance of childhood does not just encompass those youthful within the setting of book, but also features older figures who younger years are analysed to add another dimension to the book's carefully constructed plotline. Scout Finch is the narrator and protagonist of the story. She lives with her father, Atticus, her brother, Jem, and their black cook, Calpurnia, in Maycomb. Scout is clearly intelligent and a tomboy, with a combative streak and a basic faith in the goodness of the people in her community. As well having close relationships with the other members of the Finch family, she is close to Dill and also can relate somewhat to Burris in her dislike for school. ...read more.

However, as Atticus tells her, "You never really understand a person until you ... climb into his skin and walk around in it." Although she sometimes can make mistakes, whether dealing with adults or with other children, Scout always means well and her nature is essentially good. The night in which Francis starts making fun of Dill and talking unfavourably about Atticus to Scout poses several interesting points. Because Scout does not want her father to find out she beat up Francis over the Tom Robinson case (she had promised him to "keep her head"), she makes Jack promise not to say anything to him even after relating the whole incident and way in which Francis had lied to Jack about the reason for Scout hitting him. Overhearing a conversation between Jack and Atticus back in Maycomb, Scout fears Jack may break his promise about not telling Atticus about the fight. Jack keeps his word, however, which impresses Scout to no end. Even after the injustice she suffered from Francis's deceit and Alexandra's instructions to become "more ladylike", Scout sees that some adults in addition to her father still can be trusted. ...read more.

From her point of view, Boo was a nice boy who suffered at the hands of a tyrannically religious family. As a sweet, young child apparently driven mad by an overbearing father obsessed with sin and retribution, Boo epitomizes injustice and the loss of innocence that the book is strongly themed upon. For the children, who first treat him as a superstition and an object of ridicule but later come to view him as a human being, Boo becomes an important benchmark in their gradual development of a more sympathetic, mature perspective. As well as serving as a base for more important issues brought up later in the book, the first 9 chapters include many events that have their own degree of self importance. The descriptions and happenings of the children's world serve not only to introduce the young main characters but also the families and attitudes of Maycomb in general. The transitional events that involve Scout and Jem already seem to have started to change their carefree, innocent attitudes portrayed at the start of the novel into more wary and inquisitive natures. The adult world is slowly creeping up on their childhood, and the lessons learnt in the children's younger years will, unknown as yet, serve to prepare the children for the happenings of 'real life'. ?? ?? ?? ?? ...read more.