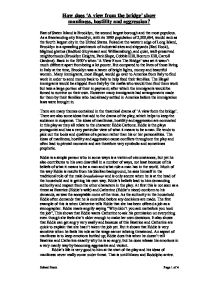 Themes contained in the theatrical drama of 'A view form the bridge'.

East of Staten Island is Brooklyn, the second largest borough and the most populous. As a freestanding city Brooklyn, with its 1990 population of 2,300,664, would rank as the fourth largest city in the United States. Poised at the western edge of Long Island, Brooklyn is a sprawling patchwork of industrial sites and shipyards (Red Hook), blighted ghettos (Bedford-Stuyvesant and Williamsburg), and quiet, well-preserved neighborhoods (Brooklyn Heights, Park Slope, Cobble Hill, Boerum Hill, Carroll Gardens). Back in the 1950's when 'A View From The Bridge' was set it wasn't much different apart from being a lot poorer. But compared to the lives of those living in Italy at the time, Brooklyn was a haven of bright lights, money and beautiful women. Many immigrants, most illegal, would go over to America from Italy to find work in order to send money back to Italy to help feed their families. The illegal immigrants would be shipped from Italy by the mafia who would then find them work but take a large portion of their in payment; after which the immigrants would be forced to survive on their own. However many immigrants had arrangements made for them by their families who had already settled in America before the immigration laws were brought in. There are many themes contained in the theatrical drama of 'A view form the bridge'. There are also some ideas that add to the drama of the play, which helps to keep the audience in suspense. ...read more.

his cause of getting Catherine to split up with him and has in fact caused more of a friction between himself and Catherine. It is also the first time that Eddie has shown very non masculine behaviour, by firstly kissing Rodolpho on the lips which completely contradicts Eddies accusations of Rodolpho being a homosexual and shows Eddie as being a hypocrite and secondly by crying, although both of these things could be blamed on Eddies drunken state. It is usually when someone is drunk that they forget to carry on their charade and reveal who they really are. Marco, although conventionally masculine, is still able to cause a conflict with Eddie or should I say Eddie is, still able to cause a conflict with Marco. Marco and Eddie conflict because Marcos manliness overshadows that of Eddie and this makes Eddie feel threatened. When Marco first arrives Arthur Miller (author) describes him as "a square-built peasant of thirty-two, suspicious, tender and quiet voiced". Eddie shows straight away his discontent for Rodolpho and his preference for Marco. This is shown by the stage directions on the page "(he is coming more and more to address Marco only). The stage directions tell anyone who wants to perform the play how the characters are meant to be acting and it also helps the reader to visualise what is happening. Marco and Eddie manage to get along the whole way through Act One, but Marco gets increasingly annoyed at Eddie's judging of Rodolpho and this leads to conflict when Eddie teaches Rodolpho to box. ...read more.

For example in the beginning of the play Beatrice has a go at Eddie about their love life, or lack of it Eddie gets annoyed and says he doesn't want to hear another word about it and Beatrice replies with a simple "okay". This shows Eddies control. But later on in the play Beatrice has a go at Eddie about his attitude towards Marco and Rodolpho and tells Eddie "I don't wanna hear no more about it, you understand? Nothin" This is a contrast from before when Eddie tells Beatrice that he doesn't want to hear anything about it. Catherine also causes Eddie to feel threatened but in a more naive way. For example when Eddie has a go at Catherine because he thinks her skirt is "too short" and she is "walking wavy", Eddie can't tell Catherine why he doesn't want her wearing those clothes, she begins to argue and therefore threaten Eddies authority. The ideas of manliness, hostility and aggression are pivotal for the structure of the play to succeed; the three ideas are used prophetically to show the audience that the play can only end in a hostile and aggressive disaster as a result of the characters manly features. Arthur Miller's views aren't clearly portrayed in the play, but I think that he feels hostility and aggression doesn't solve anything and often the real man is the one who will try to discuss issues and reach a compromise. How does 'A view from the bridge' show manliness, hostility and aggression? Robert Brain Page 1 of 4 ...read more.