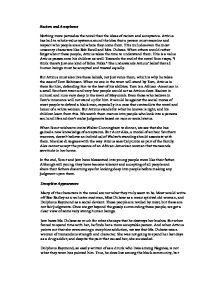 themes in to kill a mocking bird

Racism and Acceptance Nothing more pervades the novel than the ideas of racism and acceptance. Atticus has built a whole value system around the idea that a person must examine and respect who people are and where they come from. This includes even the most unsavory characters like Bob Ewell and Mrs. Dubose. When others would rather forget about these people, Atticus takes the time to understand them. This is a value Atticus passes onto his children as well. Towards the end of the novel Scout says, "I think there's just one kind of folks. Folks." She understands Atticus' belief that all human beings must be accepted and treated equally. But Atticus must also live these beliefs, not just voice them, which is why he takes the case of Tom Robinson. When no one in the town will stand by Tom, Atticus is there for him, defending him to the best of his abilities. Tom is a African-American in a small Southern town and very few people would act as Atticus does. Racism is cultural and runs very deep in the town of Maycomb. Even those who believe in Tom's innocence will not stand up for him. It would be against the social mores of most people to defend a black man, especially in a case that contradicts the word and honor of a white woman. But Atticus stands for what he knows is right, and his children learn from this. We watch them mature into people who look into a persons soul and life and don't make judgments based on race or social status. ...read more.

She sees herself as a lady, and that her families fine breeding leaves them separated from people like the Cunninghams, the Ewells, and any African American. Although she sympathizes with Tom's plight, she believes that Atticus should not take on his case. Aunt Alexandra's notions of right and wrong do not include all people equally, and the town operates the same way. It is Atticus who is the standard of a new code. Atticus stands up for right, no matter the situation. When other put parameters around who they will help, Atticus stands by anyone in need, regardless of their race or social standing. And Atticus goes beyond just helping others, he takes the time to understand them. He points out to Scout that to truly understand a person you must get inside their skin and walk around in it for awhile. Atticus does this with all the people he associates with. Rather than writing people off as "trash" or social deviants, he analyzes people and comes to a greater understanding of them. Unlike Aunt Alex, Atticus' code requires understanding, sympathy and consistency among all people. Courage "Courage is when you know you're licked before you begin, but you begin anyway and you see it through no matter what" According to Atticus Finch, an honest lawyer in Harper Lee's novel To Kill a Mockingbird teaches the children that courage can be portrayed as both physical bravery and strength, but fighting for what is right regardless of whether you win or lose takes more strength in character, and is ultimately more courageous. ...read more.

They later learn through both the words and actions of Atticus and the harsh lesson taught by Mrs. Dubose that courage takes more than bravery and physical strength. It is both emotional and psychological. Given that, we learn that because Scout and Jem's realisation of real courage, they display to the reader courage within themselves. InnocenceThe book is called to kill a mocking bird because it is about losing ones innocence. As the story progresses, the characters grow and learn some of the hard lessons of life. Scout grows up by learning that she has to be a lady to some people and to be herself around others. Jem learns that not all men are treated equal. scout learns this as well and is upset by it. "Mockingbirds don't do one thing--but make music for us to enjoy. They don't eat up people's gardens, don't nest in corncribs. They don't do one thing but sing their hearts out for us. That's why it's a sin to kill a mockingbird" (Lee, p. 90). This quote shows the reader that we shouldn't destroy a person's innocence, but that we should revere it. Also, that we should treasure it as long as we can. Scout is usually the one compared to the mockingbird in this story for numerous reasons. This is because of her age and her naivety. She is unaware that the things she does reflect upon herself. She is also compared to a mockingbird because she usually brings joy into the lives she touches but is unaware of it. Although she is not the only character in To Kill a Mockingbird, she is the most obvious in her innocence. ...read more.