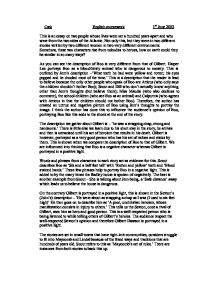 This is an essay on two people whose lives were set a hundred years apart and who were from the two sides of the Atlantic. Not only this, but they were in two different stories written by two different women in two very different environments.

Cwk English coursework 1st June 2002 This is an essay on two people whose lives were set a hundred years apart and who were from the two sides of the Atlantic. Not only this, but they were in two different stories written by two different women in two very different environments. Somehow, these two characters rise from nobodies to heroes, how on earth could they be similar in so many ways? As you can see the description of Boo is very different from that of Gilbert. Harper Lee portrays Boo as a bloodthirsty animal who is dangerous to society. This is outlined by Jem's description -'What teeth he had were yellow and rotten; his eyes popped and he drooled most of the time.' This is a description that the reader is lead to believe because the only other people who speak of Boo are Atticus (who only says the children shouldn't bother Boo); Scout and Dill who don't actually know anything other than Jem's thoughts (but believe them); Miss Maudie (who also declines to comment), the school children (who see Boo as an animal) and Calpurnia (who agrees with Atticus in that the children should not bother Boo). ...read more.

Although, Gilbert and Boo weren't give second chances by their communities and both made the decision to keep themselves to themselves. We mustn't forget that Gilbert Dawson was an outsider with no links to the community, unlike Boo. So Boo must have felt extra grievance to the community. Boo and Gilbert both react to their rejection from the communities in similar ways. This tells us a lot about the type of people they are and we discover they become very similar in many ways after this rejection. Boo faces his rejection by staying in doors and keeping himself to himself and not even interacting with any non-family members. He is, however, interested by the towns on goings and cares for some members of the community. His caring for Scout and Jem shows this. He puts a blanket around Scout when Miss Maudie's house burns down, repairs Jem's trousers when he tears and loses them in the Radley garden and most obviously and importantly he saves Scout and Jem's lives in the Bob Ewell attack. This suggests Boo is a laid back person because he isn't bothered by what people think and doesn't make fuss over people who scapegoat him e.g. ...read more.

Therefore this is a much braver act and I view Gilbert's heroics as greater than Boo's. It is from all these pieces of information that I have come to the conclusion that in both novels the writers have carefully crafted their strong opinions into stories that cover 'touchy' issues. Their views wouldn't be tolerated by their communities at the time if they had have spoken out rather than being subtle and putting across their views in stories. This is clever because the writers did not want to lose support but did want to put their view across. The stories the writers wrote were both very different but the basics of the points being made and how they were made were quite similar. The main thing to remember in each story was that a person who makes a mistake should always be forgiven and as it proved true in both cases. Also one action or moment does not make somebody a bad person and people do change. This is highlighted by the wisest and most respected character of the two novels, Atticus Finch... 'You can never judge a person until you've stepped into their skin and walked around in it' ...read more.