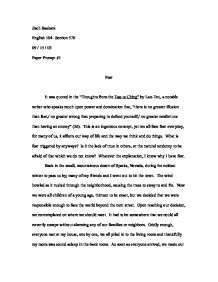 Thoughts from the Tao-te Ching

Zach Baskara English 104- Section 570 09 / 15 / 03 Paper Prompt #1 Fear It was quoted in the "Thoughts from the Tao-te Ching" by Lao-Tzu, a notable writer who speaks much upon power and domination that, "there is no greater illusion than fear,/ no greater wrong than preparing to defend yourself,/ no greater misfortune than having an enemy" (26). This is an ingenious concept, yet we all face fear everyday, for many of us, it affects our way of life and the way we think and do things. What is fear triggered by anyways? Is it the lack of trust in others, or the natural tendency to be afraid of that which we do not know? Whatever the explanation, I know why I have fear. Back in the small, mountainous desert of Sparks, Nevada, during the coldest winter to pass us by; many of my friends and I went out to hit the town. The wind howled as it rushed through the neighborhood, causing the trees to sway to and fro. Now we were all children of a young age, thirteen to be exact, but we decided that we were responsible enough to face the world beyond the next street. ...read more.

They had a fluorescent yellow jukebox, which we decided to sing with, being fully aware that other people were present, we went along and embarrassed ourselves beyond all belief, not because we were singing, but because we didn't know the words of the songs we were singing. The manager wasn't at all pleased with our actions and had us "politely" removed us from the restaurant. With a full day in front of us, we decided to make our way to the arcade, usually a hang out for the older kids, but today was our day, a day of freedom and victory. When we arrived, we saw it, the game that we all loved to play, Pac-Man, quarter after quarter, we were determined to obtain the high score. We threw the rest of our money into that machine which enabled us to play for hours on end and eventually allowed us to be known as the people who imputed the three initials of _ _ _, being extremely ignorant of our situation, after taking over one of the high scores, Alex hit the wrong button to enter blank initials. Our proof was gone, but in our hearts, Pac-Man high score number seven will always belong to us. ...read more.

I flew through the door and told my mother, she immediately called an ambulance, and shortly thereafter it had had arrived. We followed the ambulance to the hospital where we waited, terrified and frightened. Endless hours went by until the doctor finally came forward, the words he spoke were relieving, despite Alex suffering many broken bones and a mild concussion, he was okay. It was that day that we bonded more than ever, the fear made us all realize how important we each are and what fear truly was. Fear can be thought of as knowing that one day, even by a slight accident, one of your loved ones could be gone. We found out that anything could happen at a moments notice; we learned that day that we constantly need to be prepared and aware of our surroundings. Fear is not always a weakness, but a strength, a feeling that we encounter that allows us to be cautious. Our fear for the life of one of our buddies was one of the biggest contributing factors that made us four of the best friends ever. "Whoever can see through all fear will always be safe" (Lao-Tzu 26), I argue that whoever can face their known fears and prepare to take on the world in front of them are the true people who will always be safe. ...read more.