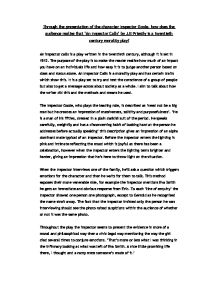 Through the presentation of the character Inspector Goole, how does the audience realise that 'An Inspector Calls' by J.B Priestly is a twentieth century morality play?

Through the presentation of the character Inspector Goole, how does the audience realise that 'An Inspector Calls' by J.B Priestly is a twentieth century morality play? An inspector calls is a play written in the twentieth century, although it is set in 1912. The purpose of the play is to make the reader realise how much of an impact you have on an individuals life and how easy it is to judge another person based on class and status alone. An Inspector Calls is a morality play and has certain traits which show this. It is a play set to try and test the conscience of a group of people but also to get a message across about society as a whole. I aim to talk about how the writer did this and the methods and means he used. The Inspector Goole, who plays the leading role, is described as 'need not be a big man but he creates an impression of massiveness, solidity and purposefulness'. ...read more.

Throughout the play the inspector seems to present the evidence in more of a moral and philosophical way then a civic legal way mentioning the way the girl died several times to conjure emotions. 'That's more or less what I was thinking in the infirmary looking at what was left of Eva Smith. A nice little promising life there, I thought and a nasty mess someone's made of it.' Within the play the characters reactions reflect there value's and morals as it is clear that Mr Birling has his job and place among the community at steak which is what matters to him the most. Sheila Birling however is more concerned for the girl as she may be able to relate and upon discovering she may have been partly responsible shows obvious signs of guilt and concern. 'I've told my father - he didn't think it amounted to much- but I felt rotten about it at the time and now I feel a lot worse. ...read more.

a quite unnecessary question too', to which the Inspector takes the moral high ground with his reply, 'It's my duty to ask questions.' At the start of the play, before the Inspector arrives Mr Birling makes a speech about how a man should take care of himself and his family. 'A man has to mind his own business and look after himself and his own' the view later gets contradicted by the Inspector. 'Because what happened to her afterwards, and what happened to her afterwards may have driven her to suicide. A chain of events.' What the Inspector is trying to get across is that everything a person does however big or small can have a direct influence on someone else's life and would not be so soon disregarded if people understood and appreciated the impact their actions could have, and in this most extreme case drove a young girl to suicide. The writer J.B Priestly in his play is trying to get across to his audience is a strong moral message which shows we are all responsible through our own actions for each other. ...read more.