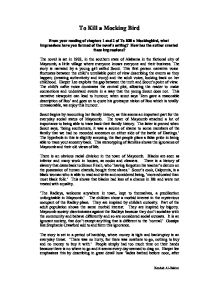 To Kill a Mocking Bird From your reading of chapters 1 and 2 of To Kill a Mockingbird, what impressions have you formed of the novel's setting? How has the author created these impressions? The novel is set in 1933, in the southern state of Alabama in the fictional city of Maycomb, a little village where everyone knows everyone and their business. The story is narrated by a young girl called Scout. This first person narrative voice fluctuates between the child's unreliable point of view describing the events as they happen; (creating authenticity and irony) and the adult voice, looking back on her childhood. Harper Lee exploits the gap between the truth and Scout's point of view. The child's na�ve voice dominates the central plot, allowing the reader to make connections and understand events in a way that the young Scout does not. This narrative viewpoint can lead to humour; when scout says 'Jem gave a reasonable description of Boo' and goes on to quote his grotesque vision of Boo which is totally unreasonable, we enjoy this humour. ...read more.

It is an ignorant society, that don't except anything that is different to the 'normal.' Gossips like Stephanie Crawford add to and form this ignorance. The story is set in a period of hardship, where money is tight and bankruptcy is an everyday threat. 'There was no hurry, for there was nowhere to go, nothing to buy and no money to buy it with.' People simply had too much time on their hands because there is no where to go and it seems every day seemed to drag on. Harper lee emphasises this by describing in great detail how 'ladies bathed before noon, after their three o'clock naps, and by nightfall were like soft teacakes...' The word 'ladies' suggests it was not just one lady, or a group of ladies, but all of the ladies that performed this almost daily ritual. It was rather a volatile atmosphere, everyone on edge waiting to see what change would occur next, whether it be good or bad. "Maycomb was an old town, but it was a tired old town when I first knew it. Somehow, it was hotter then ... ...read more.

Alabama is in the 'Bible belt,' hence the cinemas only show Jesus films. The missionary circle is described as a normal activity, and must be attended to keep in with the 'norm' of the town. It seems Scout was taught to read and write from copying out the Bible. This may strike the reader as strange but given the strong religious circumstance it is very understandable. The economic situation is very poor and so this restricts any hopes and ideas for redevelopment. This maybe why Macomb is such an old, traditional 'tired' town. Due to the financial situation it is unable to develop as a town as well as perhaps a community. Because Maycomb is slow to accept change people are not allowed to express themselves and any new ideas are banished and put aside because they do not fit in with the regular lifestyle and tradition. Maybe if more people stepped outside the boundaries of Maycomb and more newcomers came in, attitudes could change and the ignorance could perhaps start to disappear. Also this would stop Maycomb from being such an inward looking town and help to broaden its views and knowledge. Houdah Al-Hakim ...read more.