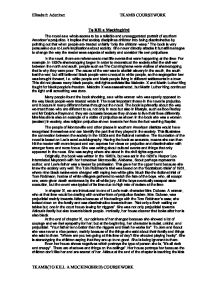 To Kill a Mockingbird The novel as a whole seems to be a reliable and unexaggerated portrait of southern American's prejudice. It implies that society disciplines children into being discriminative by pointing out that when people are treated unfairly "only the children weep." The book is very persuasive due to Lee's implications about society. She never directly attacks it but still manages to change the way the reader sees aspects of society and consider his own prejudices. In the novel, there are references to real life events that were happening at the time. For example, in 1930's sharecropping began in order to reconstruct the society after the civil war between the north and south, people such as The Cunninghams were victims of sharecropping, that is why they were poor. The cause of the war was to abolish slavery in the south, the south lost the war, but still believed black people were unequal to white people, so the segregation law was brought forward, i.e. white people and black people living in different settlements in a town. This did not please many black people, civil rights activists like Malcolm. X and Martin Luther King fought for black people's freedom. Malcolm X was assassinated, but Martin Luther King continued the fight until something was done. Many people found the book shocking, as a white woman who was openly opposed to the way black people were treated wrote it. The most important theme in the novel is prejudice, and it occurs in many different forms throughout the novel. The book is primarily about the way we treat those who are different to us, not only in race but also in lifestyle, such as Boo Radley and Mr Dolphus Raymond, they are outcasts because they choose to live their lives differently. Mrs Maudie is also an example of a victim of prejudice as shown in the book she was a woman (sexism) ...read more.

Atticus in part one said to Scout that you never know a man until you walk around in his skin. This was what the children made Mr. Cunningham realize, and stopped him from killing Tom. Atticus and Mr. Underwood were prepared to defend Tom; although Mr. Underwood was racist he was still tolerance towards Tom "he despises negroes". Mr. Underwood put aside his racial prejudice and wanted to do what was right even if it meant he had to kill someone. "A double-barrelled shotgun was leaning out his window". He was going to shoot the mob if things got out of hand. Atticus once again showing tolerance towards Tom, he was showing courage by standing up the mob, to defend Tom. Harper Lee is using the characters in the novel like Atticus to put across what she thinks about prejudice and racism. Through Atticus, she is saying she will stand up for the rights of black people, just as Atticus was doing in this chapter. The first half of the novel is mainly dedicated to the story of Arthur 'Boo' Boo Radley a recluse, who hasn't left his house since his father promised a judge, who was prosecuting a young Boo that he would make sure Boo didn't get into any more trouble. This deviation from what Maycomb society considers normal, causes Boo to achieve mythical status among the locals. Jem and Scout, they were not the only ones who preoccupied themselves with the myth of Maycomb (Boo). The adults such as Stephanie Crawford also showed interest in Boo, Jem got most of his rumours from her. "Jem received most of his information form Stephanie Crawford." This shows that prejudice does not come from kids, but is passed onto them. But as Jem and Scout grow they soon make up their own minds and start to understand Boo Radley's behaviour more but until then they still showed prejudice towards Boo Radley. ...read more.

It's when you know you begin anyway and you see it through no matter what". Atticus lived by his words as he went through with the court case. The Mockingbird Motif arises four times, first when Atticus gives Jem and Scout the rifles and urges them not to shoot mockingbirds. "it is a sin to kill a mockingbird, all they do is sing". Second, when Mr. Underwood writes about Tom Robinson's death in his column. Third, a mockingbird singing right before Scout and Jem are attacked by Bob Ewell. Finally, when Scout agrees with Atticus that prosecuting Boo for Ewell's murder would be like killing a Mockingbird. Overall, the Mockingbird motif stands against, prejudice, racism and segregation. The idea behind the book is to let people especially its main audience Middle class white people, learn more about prejudice and racism and learn how to deal with it in their society, also, to be aware of it, because it is going on everyday in different forms as shown in the novel. It is obvious that Lee's intention for this book was to change the racist ideas she discusses. I think she achieved this because it is difficult, as a reader not to look at how one treats others and question ones own morality. Although it was clearly relevant to the changing society of the 1960's, it is still relevant today because, however much we try to deny it society will always be unfairly prejudiced against a particular group of people. The novel also makes the reader question how we teach children to treat others and pass our prejudices onto the next generation. I think that "To Kill a Mockingbird" has changed and will continue change the way we look at other people, for the better and therefore I consider it a timeless classic. However, Harper Lee does not suggest that there is a quick solution to prejudice, as Miss Maudie says in the book, 'baby steps' must be taken, before you can cure the world of prejudice. ?? ?? ?? ?? Elizabeth Adeniran TKAMB COURSEWORK TKAMB(TO KILL A MOCKINGBIRD) COURSEWORK ...read more.