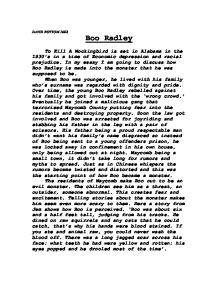 DAVID BOTTOM 10K8 Boo Radley To Kill A Mockingbird is set in Alabama in the 1930's in a time of Economic depression and racial prejudice. In my essay I am going to discuss how Boo Radley is made into the monster that he was supposed to be. When Boo was younger, he lived with his family who's surname was regarded with dignity and pride. Over time, the young Boo Radley rebelled against his family and got involved with the 'wrong crowd.' Eventually he joined a malicious gang that terrorised Maycomb County putting fear into the residents and destroying property. Soon the law got involved and Boo was arrested for joyriding and stabbing his father in the leg with a pair of scissors. His father being a proud respectable man didn't want his family's name disgraced so instead of Boo being sent to a young offenders prison, he was locked away in confinement in his own house, only being allowed out at night. ...read more.

This is the only fun that they can get. It seems that the children do try to achieve things by persecuting Boo. They all seem to have an aim to make Boo come out of his house because after all they have only seem him in their minds, not in real life. The first real incident involving Boo and the children was when Jem ripped his trousers and when he went back for them they were mended. I feel empathy towards Boo because he is trying to make contact with the children. Even though he was trying to help Jem he scared him even more. 'They'd been sewed up. Not like a lady ad sewed them, like something I'd try to do. All crooked. Almost like.' Jem shuddered ' It's almost like somebody was reading my mind.....like someone could tell what I was going to do.' From what Jem said you can see that when Jem is confronted with the idea that the monster knows what he's doing fear takes over him and for a week he is silent and wants to be alone. ...read more.

This is because Boo was only allowed out at night he wasn't used to lights. At the end of the story I could see that Harper Lee had wanted to put across a message. You don't believe what people tell you. For example Boo Radley is very nice. Even though Boo Radley isn't a Frankenstein look-alike with nuts and screws sticking out of his head and neck he was still perceived as a monster. This at first seems strange but when you read into the stories and lies told about Boo, you see how he's been created as a monster. People describe him as being wicked and evil and the children have vivid imaginations about him. About how he's over six foot and eats raw animals for breakfast. Boo wasn't created by Frankenstein and brought to life, but created by the people of Maycomb County and brought up being perceived as a monster. Maycomb County and Frankenstein are almost identical. They both created monsters and then wished to hunt them down and destroy them, even though they might not be evil and wicked. ...read more.