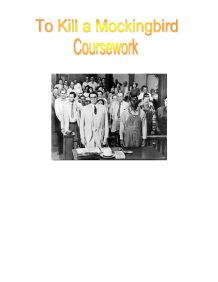 Question: What aspects of Small town life does Harper Lee show which influence the behaviour of its inhabitants? The novel of 'To Kill a Mockingbird' is set in the heart of Maycomb County, Alabama in the late 1930's, at the end of the world economic depression. As is seen in the novel, many of white people in Maycomb have joined pressure groups to try and ensure white supremacy over the black community. Maycomb is described by Harper Lee as if it was a character; it is described as being old, worn out, unkept, slow-moving, insular, poor and conservative, but it is also described with hope 'vague optimism' . This influences the behaviour of the inhabitants as the people of the town take on these characteristics as is seen in the novel. Many of the citizens in Maycomb show these characteristics alter their behaviour in different ways. Some like Mrs. Dubose show it in their attitude and physical appearance, as she has lived in Maycomb all of her life and she is old, worn out and slow moving. Others show these characteristics with there mental attitude. ...read more.

The views of the county are split over this case and this is where Harper Lee shows us the minorities of the county and the exceptions to the isolationistic view. 'I hope and pray that I can get Jem and Scout through this without bitterness, and most of all, without catching Maycomb's unusual disease'. The disease that Atticus is talking about is the spreading of the idea that Negro's are inferior and shouldn't have the respect of white people. 'I hope Scout and Jem come to me for answers instead of listening to the town.' Atticus is an example of the few exceptions to the isolationist mentality that has engulfed the community. Harper Lee shows us that many of the people in Maycomb that support the blacks' cause are afraid to show the true reasons why they supported blacks. Dolphus Raymond is a prime example of this as he is married to a black woman and many of the people of Maycomb feel that he is evil. Scout and Dill both show this when they see Dolphus outside the court house. Dolphus Raymond puts on a 'front' every time that he goes into town to give people a reason why he behaves the way he does. ...read more.

The main aspect was the verdict and this therefore has the effect that Tom Robinson took his own life. This shows that there were many knock on effects. Thus, showing us that everything in the novel happened for a reason. Harper Lee shows that Maycomb hasn't changed for many years. Small town life has influenced the behaviour of its inhabitants through gossip and the fear of change. The fear of change has led people to become set in their ways and therefore, they will do anything to keep their society the same. Gossip has enabled myths, fears, untruths and prejudices to spread throughout the town. These stories shape people's attitudes towards each other and towards the decisions that they make on subjects such as discrimination. A prime example of this is the children. They become wiser as they grow up; thus showing that gossip has influenced their decisions. They learn that not everything is true and people may want to be different from the society and not castled out, which is what's suggested in the novel. 'I think that I'm beginning to understand why Boo Radley's stayed shut up in that house all this time.... It's because he wants to stay inside.' ...read more.