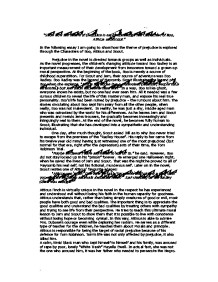 To Kill A Mockingbird - Harper Lee

If his arm had been working, he would have been able to safely climb over the fence. This innocent man did not deserve what he received, but because of his race he was given no other choice. Atticus described how it was unbelievable that children were the ones who saw the truth better than adults by saying, "They've done it before and they'll do it again; and when they do it - seems only children weep." Tom's words however, no matter how truthful and convincing, stood no chance when put against a young white woman. Link Deas, Tom's former boss, explained this even more when he commented, "Well after all, he's just a Negro." This is the theme of prejudice being exploited in the form of racial difference. Tom's former boss, Link even tried to demoralize him by saying that he was just a Negro. "You never really understand a person until you consider things from his point of view ... until you climb into his skin and walk around in it." Atticus gives Scout the crucial piece of moral advice that governs her development for the rest of the novel. ...read more.

Grimes Everett and backs that man's attempts to help the Murnas there, but ignore the poverty and problems back at home in the Quarters and even in the home of the Ewells. Mrs Farrow herself even says that they can try to educate the Negroes till they're "blue in the face" but no woman can be safe still. Differences in social strata are explored largely through the overcomplicated social hierarchy of Maycomb, the ins and outs of which constantly baffle the children. The relatively well-off Finches stand near the top of Maycombs social hierarchy, with most of the townspeople beneath them. Ignorant country farmers like the Cunningham's lie below the townspeople, and the "White Trash" Ewells rest below the Cunningham's. The black community in Maycomb, despite its abundance of admirable qualities, squats below even the Ewells, enabling Bob Ewell to make up for his own lack of importance by persecuting Tom Robinson. These rigid social divisions that make up so much of the adult world are revealed in the book to be both irrational and destructive. For example, Scout cannot understand why Aunt Alexandra refuses to let her consort with young Walter Cunningham. Harper Lee uses the children's perplexity at the unpleasant layering of Maycomb society to critique the role of class status and, ultimately, prejudice in human interaction. Kyle Downey ...read more.