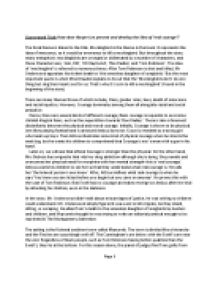 To Kill a Mockingbird. How does Harper Lee present and develop the idea of real courage?

﻿Coursework Task: How does Harper Lee present and develop the idea of ?real courage?? The focal theme is linked to the title. Mockingbird is the theme in the book. It represents the idea of innocence, so it would be erroneous to kill a mockingbird. But throughout the story, many metaphoric mockingbirds are wronged or obliterated by a number of characters, and these Characters are; ?Jem, Dill?, ?Mr Raymond?, ?Boo Radley? and ?Tom Robinson?. The idea of ?mockingbird? is referred to numerous times. After Tom Robinson is shot and killed, Mr Underwood appraises his violent death to ?the senseless slaughter of songbirds?. But the most important quote is when Miss Maudie explains to Scout that the ?Mockingbirds don?t do one thing but sing their hearts out for us. That?s why it?s a sin to kill a mockingbird? (Found in the beginning of the story). There are many themes those of which include; Class, gender roles, laws, death of innocence and racial injustice. However, Courage dominates among them all alongside racial and social prejudice. Hence, there are several kinds of different courage; Basic courage is requisite to overcome childish illogical fears, such as the superstition towards ?Boo Radley?. There is also a foremost dissimilarity between the physical and moral courage. Initially, Courage is shown to be physical. ...read more.

By the end of the novel, Scout meets him and he is finally human to her. Boo is the one of the book?s most important mockingbirds, and although he has suffered, he remains a symbol of good. There are also gothic elements that foreshadow the plot but are balanced by traditional values. Examples are the fire that destroyed Miss Maudie?s house and the town bonding together to retrieve her possessions, the mad dog shot by Atticus, and the dark Halloween night when Bob Ewell attacked Jem and Scout but were saved by Boo Radley. Scout Finch is a curious girl both mentally and physically. She is bright, thoughtful and acts with good intentions all at an early age. Distinct most girls, Scout are a sort of tomboy. She replaces dresses with overalls, plays with boys (Jem and Dill) and their games and fights other boys in school with no fear. That is a sign of physical courage. Scout starts as an innocent five year old with little understanding of evil. As the novel progresses, she encounters evil for the first time, in the form of racial prejudice. Throughout the book, Atticus nurtures Scout so that she develops and her strong character prevails over any evil she experiences. She retains her conscience without becoming corrupt or cynical. ...read more.

Throughout the book, Atticus is consistently and rigidly committed to justice and proves this when he believes for a moment that Jem stabbed Mr Ewell as self-defence. Jem Finch is a young boy entering puberty. Early on, he tries to conquer his fear. He runs past the Radley place, touches it and later returns there while he risks being shot at, just to fetch his trousers that were caught in the fence. Atticus tells him that this is only physical courage, and that it takes more to understand. He becomes confused and vulnerable when justice fails with Tom Robinson. But he learns from the traumatic times by duplicating the things Atticus had taught him and advises Scout. An example is when he protects a roly-poly bug from Scout because it has done nothing to harm her. Through the end of the novel, we have learned the new definition; real courage. Our ideas on courage were manipulated. The novel itself is about the investigation of the good and evil in human philosophy. It is depicted through Scout and Jem, childhood innocence. They first assumed everyone was good since they have never seen evil but once they did, they confronted it and tried to understand. Atticus teaches his children the ethics of sympathy, understanding and courage. He appreciates superior qualities while understanding other people?s viewpoint of living. Page ...read more.