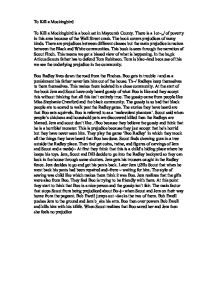 To Kill a Mockingbird is a book set in Maycomb County.

To Kill a Mockingbird To Kill a Mockingbird is a book set in Maycomb County. There is a 1ot~,,/ of poverty in this area because of the Wall Street crash. The book covers prejudices of many kinds. There are prejudices between different classes but the main prejudice is racism between the Black and White communities. This book is seen through the narration of Scout Finch. This means we get a biased view of what is happening. In the bo,pk Atticus Scouts father has to defend Tom Robinson. Tom is blac~/and because of this we see the underlying prejudice in the community. Boo Radley lives down the road from the Finches. Boo gets in trouble / and as a punishment his father never lets him out of the house. Th~/ Radleys keep themselves to them themselves. This makes them isolated in a close community. At the start of the book Jem and Scout have only heard gossip of what Boo is like and they accept this without thinking that all this isn't entirely true. The gossip came from people like Miss Stephanie Crawford and the black community. The gossip is so bad that black people are to scared to walk past the Radley gates. The stories they have heard are that Boo eats squirrels. Boo is referred to as a 'malevolent phantom'. Scout said when people's chickens and household pets are discovered killed then the Radleys are blamed. ...read more.

has a son who is truant and the community accep~ithis because the Ewells don't care about anything. The community doesn't respect the Ewells. The Black community is the bottom of ~ class structure. This is because the majority of the community doesji~t respect them and some hate them. The only person who openly ~spects the Black people is Atticus. There is no change in prejudices between the classes in the book. The Negro people of Maycomb County and the rest of the USA are descended mainly from West African slaves concentrated in the south of America. In those times white people were seen as being superior to the black people. The whites in Maycomb County still b~Ji~ved this and treated the blacks in this way. V Scout and Jem go to Calpurnia's church First Purchase. The Blacks and Whites have segregated churches. The Blacks are so poor that t~4' ca~ afford money for a piano, organ or hymnbooks. We are sho~yui that the black people feel in a similar way that the whites do by the reception that Cal gets for bringing Scout and Jem. Most of the Community cant read because they have no schools. When they get back from church scout tells Cal that she knows better than to talk "Nigga like," This is racism because scout automatically thinks that the way Black peopl,~ talk is worse than White peoples talk. This shows that Scout thinks that Whites// are superior to Blacks After the community is told Atticus is going to defend Tom Robinson. ...read more.

The black people stand as Atticus leaves as a sign of respect. The next day the black people show more gratitude by giving Atticus food. Miss Maudie says that there are people on who are on Atticus' side and "we're making a step," against racism. She also says that Atticus was given the case because he would make people how bad racism was in Maycomb County. Scout learns about Hitler and the persecution of the Jews. Mrs. Gates says, "Over here we have no prejudice," Mrs. Gates is blind to the prejudice in America. Maybe she doesn't think the prejudice is wrong. Her comments are ironic because Scout over heard a conversation Mrs. Gates was having with Mrs. Stephanie Crawford she said "it's about time, somebody taught 'em (blacks) a lesson they're getting way~~�~c~� themselves, an' the next thing they think they can marry us." Calpurnia is an example of how Black peoples should be treated. Atticus trust her to look after the children and she is a mother figure to them. Atticus, the children and the neighbours respect Calpurnia. In this book the only real prejudice overcome was that of Scouts feelings towards Boo Radley. Scout seeing that there was nothing wrong Boo hiding away inside his house overcame this. It was just something th~t he wanted to do. In the book there are no changes in the prejudices b?fween Blacks and Whites but Miss Maudie's Comments about the co~munity taking a step against Racism then that means that maybe p~bp1e will accept Black people into the community. Frankie Hine-Hughes J~Lu ~ U ~ ...read more.