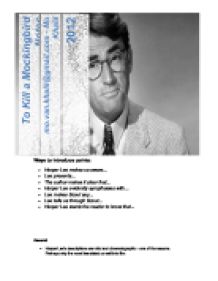 Ways to introduce points: * Harper Lee makes us aware... * Lee presents... * The author makes it clear that... * Harper Lee evidently sympthaises with... * Lee makes Scout say... * Lee tells us through Scout... * Harper Lee wants the reader to know that... General * Harper Lee's descriptions are vivid and cinematographic- one of the reasons. Perhaps why the novel translated so well into film. * Referring to the epigraph and what it tells the reader about key themes will help to show your awareness of authorial purpose. * Referring to any symbolism used by the author can be effective- for instance, the quiet, ominous feeling in the courtroom when the jury returns is like a old February morning, when mockingbirds were still. (ch21pg216) * TKAMB is a novel with a mixture of nostalgia and criticism * A microcosm of American society in the 1930s * Consider the ideal of Southern Womanhood an women as delicate, fragile creatures, and how this would of affected and influenced men's feelings towards Mayella Ewell in the trial. * Scouts naivety is highlighted when the narrator understands * All of Scouts educational experiences and growing up takes place outside school * We see how entrenched the idealised view of women is when Atticus says he is 'in favour of Southern womanhood as much as anybody, but not for preserving polite fiction at the expense of human life' * Real courage in Lee's view is when you continue what you are doing even though you are fighting a losing battle. This is explained in depth in relation to Mrs. Dubose, who Atticus describes as the bravest person he had met. * Starting an essay: try link to a theme, show how language is presented, and how the chapter highlights themes. And does the narrator affect our response of the presentation of the theme. * Jem's definition of entailment (ch2 page 26) ...read more.

This is a crucial time to have gained the children's respect- just before the trial. * We need to consider the symbolism and irony of the mad dog incident. Atticus is protecting the community from something dangerous. Is he later able to protect something innocent from the madness of the community? With the dog called 'Tim Johnson', a name not dissimilar to 'Tom Robinson' we realise that Harper Lee want s us to draw parallels between this incident and the trial. * Atticus had managed to make a man from a prejudiced family stop and think for a moment and this was 'the shadow of a beginning' (ch23pg228) * Atticus is Lee's spokesman, embodying the themes of justice, tolerance, goodness and courage. Yet despite his strong principles and idealism, he is trapped within the society in which he lives. * Lee does not admire physical courage. She leads the reader to share her view of the importance of the kind of moral courage shown by Atticus. * Atticus's maxim * Has the same name as a roman nobleman and diplomat. Titus Atticus; who was known for his impartial wisdom and interest in books. * Whole life is built on telling the truth is it right to depart from that now, he 'sat looking at the floor for a long time.' (ch30) A flaw? * Atticus is presented as an emobodiment of everything Lee respects in a lawyer, citizen, Christian and father. He is the moral centre of TKAMB. * He was feeble, nearly fifty. * Scout says "I ran to Atticus for comfort." * Miss Maudie: "We are so rarely called on to be Christians, but when we are, we've got men like Atticus to go for us". That respect and admirations is palpable too when he goes with Calpurnia to break the news of Tom's death to Helen Robinson. * Reprimands Jem in a voice like "the winter wind" * A good father and normally a good judge of human behavior. ...read more.

Her major role in the plot seems to be to reinforce Atticus's philosophy, and to be a constant and reassuring model for the children when Atticus is busy elsewhere. * Scout: "She loved everything that grew on God's earth"(ch5page48) with the exception of nut grass, which is hugely symbolic of prejudice that can sweep through a society. * Disapproval of "foot-washers" who think "women are a sin by definition" (ch5pg51) * Miss Maudie: "Why, one spring of nut-grass can ruin a whole yard...the wind blows it all over Maycomb county!" (ch5pg48) * Optimistic after her house burns down (ch8); theme of courage. * "People in their right minds never take pride in their talents" (ch10) * Miss Maudie quotes and notes on York page 15 The Ewells * Through Bob Ewell's death at the end, Lee seems to be saying that he is beyond hope, or perhaps that justice must be seen to be done. Perhaps his death represents hope for the future, as the fear he caused, which created a barrier to truth and understanding, has now been removed. Mayella's flowers can now begin to flourish. * Attacks the children mainly because of Southern values, which is no matter how bad things are you must always defend your honour and pride. Ironically Bob Ewell is seen as having none of those by the Maycomb community. * Bob Ewell's extreme laziness is shown by his being fired from the Work Progress Administration. This organisation was set up during the Depression in 1935 to give work to those who were unemployed. It was rare for anyone to be fired from the WPA. * Show that whites can be more culpable than poor blacks. * Bob Ewell is described as a "little red rooster" and a "bantam cock". He's compared to a chicken, a flightless bird that 'crows' rather than sings. He is selfish and is unable to 'fly' above his own prejudices. Mrs Dubose * Known as the "meanest old women who ever lived" (ch4page41) ...read more.