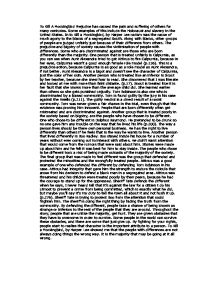 To Kill A Mockingbird - Prejudice has caused the pain and suffering of others for many centuries.

To Kill A Mockingbird Prejudice has caused the pain and suffering of others for many centuries. Some examples of this include the Holocaust and slavery in the United States. In to Kill a Mockingbird, by Harper Lee racism was the cause of much agony to the blacks of a segregated South. Along with blacks, other groups of people are judged unfairly just because of their difference from others. The prejudice and bigotry of society causes the victimization of people with differences. Some who are discriminated against are those who are born differently than the majority. One person that is treated unfairly is Calpurnia, as you can see when Aunt Alexandra tried to get Atticus to fire Calpurnia, because in her eyes, Calpurnia wasn't a good enough female role model (p.136). This is a prejudice action, because Calpurnia is as good as a role model as Aunt Alexandra, if not better. Aunt Alexandra is a bigot and doesn't see the character of Calpurnia, just the color of her skin. Another person who is treated like an inferior is Scout by her teacher, because she knew how to read. She discovered that I was literate and looked at me with more than faint distaste. (p.17). Scout is treated like it is her fault that she knows more than the average child did. She learned earlier than others so she gets punished unjustly. Tom Robinson is also one who is discriminated by a biased community. ...read more.

They believed that the Aryan race had to regain control over the South and blacks were inferior. This group formed into different sections and basically became a cult or otherwise known as a sect. They were fundamentalists who wore white robes and carried torches. They hanged black people for public entertainment and unfortunately, at the time, they had many supporters. After a few years, this group diminished its actions and it died down. It unfortunately came back strong in the 1920s and 30s. This group, unfortunately, became much more organised and changed from just a disorganised group of people going around on horses hanging people, to an organised group which had a grip over the whole country, from east to west, with rulers with crazy names such as, 'Grand Titan' or 'Grand Cyclops'. These names may sound crazy and silly but this generation of Klan were very serious indeed and I think in essence, the rules really changed. The Civil war was a thing of the past and it was no longer the case of, 'Protecting the confederacy', it was just now, basically, a racist group. Fortunately, as horrible as the first and second world war were, they distracted the American people away from the KKK and the KKK died down again. Unluckily, it was not gone forever as one would have hoped. It came back in the late fifties. From then on, the Ku Klux Klan went on doing horrible acts of torture and assassination towards black. ...read more.

Many non-racist people in a way, show pity for people like these. Kurds rebelled all over Europe, in extreme cases, they even burned themselves. All this rebelling won most people's hearts around the world. Now people back the Kurds and are against the Turks. This just proves how speaking out can help immensely. Now the Turks are in trouble, they won't be able to enter the EU. The Kurds really did it by speaking out. By the mid-seventies, many white people supported blacks and wanted a change in the government to be made. This came soon thanks to the power of free speech. Men and women like Martin Luther King Jr. and Malcolm X will always have a place in my heart for theirs is a bravery, almost, like no other. They fought against all odds to bring a whole race, out of the slums. There are different kinds of courage. There is courage in battle, and there is courage in aid, but this courage, no, it's like no other. These men and women, will have followers forever. Atticus' courage was a very peculiar one. It was one that was not expressed on the outside, but rather a quality that was on the inside, unbeknownst to Scout and Atticus until the trial. Atticus' courage was one with the same likeness of Martin Luther King's. He went against all odds and problems humiliation, shame, distrust, even discrimination against himself, to follow through with something in which he believed in. After all of this effort, he isn't even rewarded with justice. The jury itself is racist. It was an unfair world back then, and, unfortunately, in some places, it still is today. ...read more.