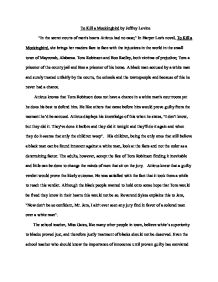 To Kill a Mockingbird - review.

To Kill a Mockingbird by Jeffrey Levine "In the secret courts of men's hearts Atticus had no case;" In Harper Lee's novel, To Kill a Mockingbird, she brings her readers face to face with the injustices in the world in the small town of Maycomb, Alabama. Tom Robinson and Boo Radley, both victims of prejudice; Tom a prisoner of the county jail and Boo a prisoner of his home. A black man accused by a white man and surely treated unfairly by the courts, the schools and the townspeople and because of this he never had a chance. Atticus knows that Tom Robinson does not have a chance in a white man's courtroom yet he does his best to defend him. He like others that came before him would prove guilty from the moment he'd be accused. Atticus displays his knowledge of this when he states, "I don't know, but they did it. They've done it before and they did it tonight and they'll do it again and when they do it-seems that only the children weep". ...read more.

Even the school teacher who should know the importance of innocence until proven guilty has convicted Tom in her mind. Scout, confused from the contradictory remarks made by Miss Gates, who'd said it was a good thing Tom Robinson's conviction proved guilty because the blacks "were getting high and mighty." Scout describes her confusion at the inconsistency of her teacher in treating everyone equally. "Well coming out of the courthouse that night Miss Gates was-she was goin'down the steps in the front of us, you musta not seen her-she was talking to with Miss Stephanie Crawford. I heard her say its time somebody taught em a lesson, they were getting way above themselves, an'the next they thing they think they can do is marry us. Jem how can you hate Hitler so bad an' turn around an'be ugly about folks right at home". Miss Gates, Scouts teacher taught the children that Hitler wronged, while failing to see the wrongs she committed by the hateful prejudice toward others in her own community. ...read more.

If Tom changed white he would be alive and well because obviously he told the truth in the court room. He should be respected for helping the Ewell children when no one else seemed to care. "You know how they are. Easy come, easy go. Just shows you, that Robinson boy was legally married, they say he kept himself clean, went to church and all that, but when it comes down to the line the veneer's mighty thin. Nigger always comes out in 'em". Even faced with Tom's death the town people failed to develop a conscious. "Senseless killing-Tom had been given due process of law to the day of his death; he had been tried openly and convicted by twelve good men and true. My father had fought for him all the way". Scout refers to the twelve men that convicted an innocent black man to almost certain death as senseless killing, done through the prejudice they held in their hearts. ...read more.