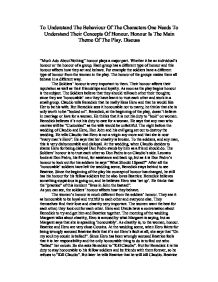 To Understand The Behaviour Of The Characters One Needs To Understand Their Concepts Of Honour. Honour Is The Main Theme Of The Play. Discuss "Much Ado About Nothing" honour plays a major part. Whether it be an individual's honour or the honour of a group. Each group has a different type of honour and this honour affects how they act and behave. For example the soldiers have a different type of honour from the women in the play. The honour of the groups makes them all behave in a different way. The Soldiers' honour is very important to them. Their honour affects their reputation as well as their friendships and loyalty. As soon as the play begins honour is the subject. The Soldiers believe that they should tell each other their thoughts; since they are 'honourable' men they have learnt to trust each other and work in a small group. Claudio tells Benedick that he really likes Hero and that he would like Her to be his wife. ...read more.

After all the 'honourable' soldiers have left the wedding scene, Benedick stays behind to see Beatrice. Since the beginning of the play his concept of honour has changed, he still has his honour for his fellow soldiers but he also loves Beatrice. Benedick believes something suspicious is going on, and he believes Hero was 'set up'. He thinks that the "practice" of this incident "lives in John the bastard". As you can see, the soldiers' honour affects how they behave. The women's honour is much different from the soldiers' honour. They see it as honourable to be loyal and truthful to each other and everyone else. They themselves find their love and chastity very important. The women want the best for each other; they look out for each other. Hero and Ursula have a conversation about Benedick to try and get him and Beatrice together. The morning of the wedding Margaret talks about chastity, Hero is amused by what Margaret is saying, but as Margaret says that she is speaking 'honourably'. ...read more.

He has only one daughter so when she marries he will want her to marry a man with his own, good reputation. At the wedding, when Leonato hears about Hero being disloyal, he has to 'reject' her. Leontato is the town Governor so he has to keep a good reputation towards the public. The public wouldn't like to see him on the side of a disloyal person as then he would be disloyal. Leonato feels that "Death is the fairest cover for her shame/ that may be wished for." Since she, Hero, has been disloyal, Leonato thinks it is right to "Let her die". Leonato's "Hands will tear her if they wrong her honour". This shows that the daughter's honour affects Leonato's honour, and how he feels about her behaviour. Dogberry also has a reputation, but his is not a reputation for honour. His reputation is for being stupid. Since he is stupid he is always misunderstanding things. In front of the Sexton he repeats that one of the offenders, Borachio, calls him "an ass". And since he is stupid be thinks this is a compliment. ...read more.