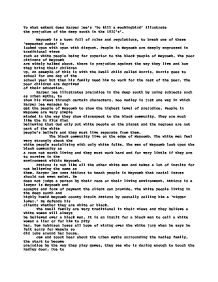 To what extent does Harper Lee's 'To kill a mockingbird' illustrate the prejudice of the deep south in the 1930's'.

To what extent does Harper Lee's 'To kill a mockingbird' illustrate the prejudice of the deep south in the 1930's'. Maycomb is a town full of rules and regulations, to break one of these 'expected codes' is looked upon with upon with disgust. People in Maycomb are deeply engrossed in traditional views such as white people being far superior to the black people of Maycomb. The poor citizens of Maycomb are widely talked about. there is prejudice against the way they live and how they bring their children up. An example of this is with the Ewell child called Burris. Burris goes to school for one day of the school year but then his family need him to work for the rest of the year. The poor children are deprived of their education. Harper Lee illustrates prejudice in the deep south by using subjects such as urban myths, to show his views through certain characters. Boo Radley is just one way in which Harper Lee manages to get the people of Maycomb to show the highest level of prejudice. ...read more.

He defends his clients whether they are white or black. The Ewell family are very traditional in their views and they believe a white woman will always be believed over a black man. It is an insult for a black man to call a white woman a liar or for him to pity her. Tom Robinson loses all hope of wining over the white jury when he says he felt sorry for Mayela so did jobs around her house. Jem and Scout hear about the urban myths surrounding the Radley family. the start to become prejudice by the way they play games, they see who is daring enough to touch the Radley door. Due to people's views of Boo Radley when he was younger, people have never forgot about the way he behaved. Boo use to socialise in large groups and the people of Maycomb always thought they were up to no good. Unfortunately for Boo he became very intoxicated with alcohol and went hoy riding one day. Since Boo's father told the court he would keep him at home and he would never cause any trouble again people have centred their prejudice around him and what goes on in the Radley house. ...read more.

She is a traditional character and Harper Lee manages to capture prejudice through the eyes of a white woman very well. She does not think highly of black people and wants scout to dress more like a lady and wonders why Calpurnia has let her get away with looking untidy for so long. Calpurnia takes Scout and Jem to the black church with her one time; this was not what Aunt Alexandria wanted. White children belong with white adults was the view of Aunt Alexandria. Mr Dolphus Raymond was not like every other white person, he wanted to mix with the black people. Dill, being brought up through a traditional family did not see it wrong to be prejudice. In conversation with Jem Dill says 'He doesn't look like trash', this is the expectation of traditional views at that time. If a white person mixes with black people then they are looked upon as 'trash'. Maycomb is a town on the edge of change, Atticus knew he was going to lose the court case that time but he made a lot of people in the town question their traditional views. ...read more.