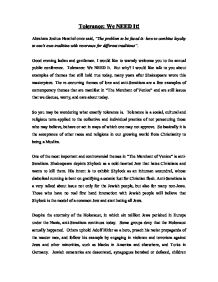 Tolerance: We NEED IT

Tolerance: We NEED It! Abraham Joshua Heschel once said, "The problem to be faced is: how to combine loyalty to one's own tradition with reverence for different traditions". Good evening ladies and gentlemen. I would like to warmly welcome you to the annual public conference. Tolerance: We NEED It. But why? I would like talk to you about examples of themes that still hold true today, many years after Shakespeare wrote this masterpiece. The re-occurring themes of love and anti-Semitism are a few examples of contemporary themes that are manifest in "The Merchant of Venice" and are still issues that we discuss, worry, and care about today. So you may be wondering what exactly tolerance is. Tolerance is a social, cultural and religious term applied to the collective and individual practice of not persecuting those who may believe, behave or act in ways of which one may not approve. So basically it is the acceptance of other races and religions in our growing world from Christianity to being a Muslim. One of the most important and controversial themes in "The Merchant of Venice" is anti-Semitism. ...read more.

It is this prejudice that sets the plot and is a major theme within "The Merchant of Venice". Another key theme is love. There are many relationships in this play and not all are the type that involves the love that a man has for a woman, or vice versa. Bassanio and Portia, Jessica and Lorenzo and Gratiano and Nerissa are all relationships that involve a man and a woman, which are of course relevant to today's society. When one looks deeply into these relationships, they would see parallels to the ones of today. For instance, the concept that all three marriages will probably not last, is a parallel to the number of divorces that are occurring today. The second relationship that is explored in "The Merchant of Venice" is the type of man to man. Homosexuality is a type of love that happens in any period in time and is even more relevant today, as homosexuality has blossomed even more in the 1990's, creating a large issue. Antonio's "love" may not be the type that we are thinking about, but if this happened today we might see it as homosexuality. ...read more.

We need community groups and the government to spread the message to other countries and religions, and we need to unite and spread peace. Without tolerance, the world would not revolve, and we would not be where we are today. As Martin Luther King Jr. once said: "I look forward confidently to the day when all who work for a living will be one with no thought to their separateness as Negroes, Jews, Italians or any other distinctions. This will be the day when we bring into full realization the American dream -- a dream yet unfulfilled. A dream of equality of opportunity, of privilege and property widely distributed; a dream of a land where men will not take necessities from the many to give luxuries to the few; a dream of a land where men will not argue that the color of a man's skin determines the content of his character; a dream of a nation where all our gifts and resources are held not for ourselves alone, but as instruments of service for the rest of humanity; the dream of a country where every man will respect the dignity and worth of the human personality." Thank You. ?? ?? ?? ?? ...read more.