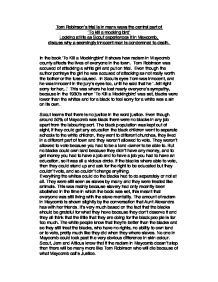 Tom Robinson's trial is in many ways the central part of 'To kill a mocking bird' Looking at life as Scout experiences it in Maycomb, discuss why a seemingly innocent man is condemned to death.

Tom Robinson's trial is in many ways the central part of 'To kill a mocking bird' Looking at life as Scout experiences it in Maycomb, discuss why a seemingly innocent man is condemned to death. In the book 'To Kill a Mockingbird' it shows how racism in Maycomb county affects the lives of everyone in the town. Tom Robinson was accused of attacking a white girl and put on trial. Even though the author portrays the girl he was accused of attacking as not really worth the bother or the fuss caused. In Scouts eyes Tom was innocent, and he was innocent in the jury's eyes too, until he said that he '..felt right sorry for her,..' This was where he lost nearly everyone's sympathy, because in the 1930's when 'To Kill a Mockingbird' was set, blacks were lower than the whites and for a black to feel sorry for a white was a sin on its own. Scout learns that there is no justice in the word justice. Even though around 50% of Maycomb was black there were no blacks in any job apart from the labouring sort. The black population was kept out of sight, if they could get any education the black children went to separate schools to the white children, they went to different churches, they lived in a different part of town and they weren't allowed to vote. ...read more.

Mayella said it was. Then Atticus asked if that was when Tom took advantage of her, and again Mayella said that it was. Mayella said that she was beaten around the right side of her face, but when Atticus asked Tom to stand up they all noticed that Tom's left hand was crippled so he couldn't have hit Mayella on the right side of her face unless he hit oddly. When it was Tom's turn to testify he said that Mayella had asked him to bust up a chiffarobe and lots of odd jobs on different occasions but on November 21st of last year she had asked him to help her get a box down from a chiffarobe, (not the same one that he had already broken up). He got up on a chair and went to get the box down but Mayella grabbed his legs. He was so surprised that he got off the chair knocking it over but that was all the furniture that he had disturbed. Mayella had then kissed him on the side of the face and then asked him to kiss her back. 'She says she never kissed a grown man before an's she might as well kiss a nigger. She says what her papa do to her don't count.' I said to her '"Miss Mayella, lemme outa here" an' I tried to run but she got her back to the door an' I'da had to push her. ...read more.

Who as everyone now knows, was the one who abused and beat Mayella. The reason that Mayella went along with what her father said was because she was scared of what he might do. No praise was given to Tom Robinson for being a good man, even though he was law abiding and honest. In contrast, Bob Ewell, who everyone knows is an awful father. Who abuses his daughter and drinks all the money that should be used for children. He even acts like a filthy, rude, drunk at the trial who lied about what happened to clear his own name. Yet all Tom ever said was the truth, but because of his colour everyone over looked the truth and the whole reason of 'Justice' and sentenced him to death. And for what? Justice? Well Tom Robinson finally got justice, because Bob Ewell was killed when he attacked Jem and Scout, unfortunately for Tom, it was too late. The trail was a major point in both Jem and Scout's lives. They learned that the world and people are selfish and cruel. Their innocence held true right till the end of the trial, and the whole way through they believed that Tom would be found innocent like he was. It's only the innocence of a child that can be pure, non expectant and true. It's because if the influence it had on Scout and her brother Jem, and infact the rest of Maycomb, that the trial is in many ways the central part of 'To Kill A Mockingbird'. ...read more.