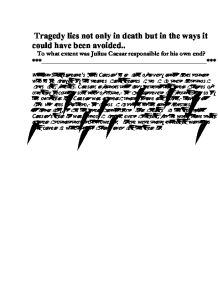 Tragedy lies not only in death but in the ways it could have been avoided..To what extent was Julius Caesar responsible for his own end?

Tragedy lies not only in death but in the ways it could have been avoided.. To what extent was Julius Caesar responsible for his own end? *** *** William Shakespeare's 'Julius Caesar' is a tale of a very ambitious roman who is betrayed by his nearest and dearest, not to mention most trusted, friends. Caesar, a famous military general had great hopes of one day becoming sole ruler of Rome,- but was prevented from doing so by his own death . Caesar was a great man,- brave and noble,- having all the virtues of a hero,- but most terrible in his ambitiousness. Ultimately,- it is his great ambition that leads to his downfall. Caesar's death was a most tragic event indeed, for he would have made a great roman monarch. However, there were many unheeded warnings and caveats which might have averted his death. In the first act itself we see that Caesar comes across a soothsayer who fore tells that the future holds terrible things for Caesar. ...read more.

In this way, Caesar lets his common sense be consumed by his arrogance and overconfidence. Calpurnia has a strange vision or nightmare in which she sees the statue of Caesar spout blood like a fountain, around which many smiling 'lusty Romans' crowded to bathe their hands in his blood. This convinced Calpurnia further of the danger Caesar was in and she pleaded with him to stay at home. At first Caesar agrees,- but then Decius Brutus arrives and interprets the dream to show that the statue of Caesar spurting blood indicated that from Caesar, Rome would strike reviving blood, and that the men bathing their hands in his blood implied that many Romans would press for charms and relics etc. At this, Caesar, who loves being flattered in this way, feels that Calpurnia's fears were foolish and baseless, and decides to not stay at home after all. This was another mistake on Caesar's part because Decius Brutus was in fact part of a conspiracy against him and had only told him these flattering things to ensure that he be present at the Capitol, as his murder was to take place a little later that very same day. ...read more.

This person has many virtues, but one great vice- and ultimately, he is put in a position in which, this one small fault of his is exposed, leaving him vulnerable and susceptible to attack. And so, it is finally this one small flaw in him, which leads to his ruin. In Caesar's case,- his arrogance and overconfidence, his greed for flattery, his ignorance, and most of all,- his ambitiousness, were the cause of his downfall. When discussing the death of Julius Caesar and the various ways in which it might have been avoided, one comes across many 'if's',- If Caesar had done this, or if Caesar had done that... he might have been saved. But fate, it seems had deemed a different course for Caesar. Despite the many warnings, omens, and chances of escape,- death, like a cold shadow, did indeed sweep its cold fingers over him, in the end. Everything went as planned, and Julius Caesar was stabbed to death in the Capitol, that fateful day, by the very men he trusted the most. And so fell the mighty Caesar .... ...read more.