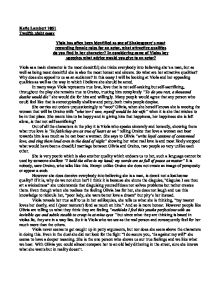 Twelfth night - Viola has often been identified as one of Shakespeare's mostrewarding female roles for an actor, what attractive qualitiesdo you find in her character?

Katie Lambert 10S1 Twelfth night essay Viola has often been identified as one of Shakespeare's most rewarding female roles for an actor, what attractive qualities do you find in her character? In considering some of Violas key speeches what advice would you give to an actor? Viola as a main character is the most deceitful; she tricks everybody into believing she's a man, but as well as being most deceitful she is also the most honest and sincere. So what are her attractive qualities? Why does she appeal to us as an audience? In this essay I will be looking at Viola and her appealing qualities as well as the way in which I believe she should be acted. In many ways Viola represents true love, love that is not self-seeking but self-sacrificing, throughout the play she remains true to Orsino, trusting him completely "To do you rest, a thousand deaths would die" she would die for him and willingly. ...read more.

She is very poetic which is also another quality which endears us to her, such a language cannot be used by someone shallow "I hold the olive in my hand; my words are as full of peace as matter" It is nobody, save Orsino, who talks like this. Except unlike Orsino she does not create an image of pomposity or appear a snob. However she does deceive everybody into believing she is a man, is deceit not a loathsome quality? If it is, why do we not shun her? I think it is because she shuns the disguise, "disguise I see thou art a wickedness" she understands that disguising yourself does not solves problems but rather creates them. Even though when she realises the feeling Olivia has for her, she does not laugh and use this knowledge to ridicule her, "poor lady, she were better love a dream" but pity's her instead. ...read more.

She is the one person who shows us our true feelings and we like what we hear. With Olivia you could almost compare her to an old lady dithering in the street, sure she knows what she wants but in reality doesn't. I think what make Viola an endearing character to play is that she has a heart; she has feelings that aren't petty and annoying but deep and thoughtful. I think that character is a hard character to play because she has many complexities and acting her so she does appear thoughtful is very hard to achieve. I think that for example when Malvolio gives Viola the ring and afterwards does her soliloquies that she should stare thoughtfully down at the ring occasionally looking into the audience but her attention always being brought back to the ring as a focal point. Because this is kind of an important part is also adds a small amount of drama. Viola is a rewarding character but also a very complex character to play. ...read more.